The BYU Cougars and the Gonzaga Bulldogs will be facing off in the West Coast conference tournament on Tuesday. Gonzaga came away with an 11 point win on the road the only time these two faced during the regular season.

The Bulldogs finished the regular season with a perfect 25-0 record, 15-0 in Conference play. Last time out in the West Coast Semifinals, Gonzaga came away with a 78-55 victory against Saint Mary's Gaels. The Bulldogs shot 53.2% from the field, and 33.3% from deep. They assisted on 13 of their 33 field goals. All 5 starters finished the game in double figures. Drew Timme led the team with 18 points and 8 rebounds. Gonzaga's defense was stifling, holding the Gaels to 36.1% shooting and 10% from deep. The Bulldogs outrebounded Saint Marys 44-31. Gonzaga is averaging 92.3 points per game, good for second in the nation. They are allowing 68.8 points per game to their opponents.

BYU heads into this game having won 5 in a row since they lost to Gonzaga during the regular season. Last time out they came away with an 82-77 win in overtime at home against Pepperdine. The Cougars shot 42.6% from the field, 33.3% from deep, and went 23-27 from the line. Twelve of their 26 field goals came via assist. Alex Barcello led the team with 23 points and 9 rebounds. BYU limited Pepperdine to 18.5% shooting from three, and pulled down 11 more rebounds in the game. The Cougars are averaging 78.6 points per game, while giving up 67.3 to the opposition. Alex Barcello leads the team with 15.7 points and 4.6 assists per game.

Gonzaga is ranked number 1 in the nation, and are 1 win away from seemingly locking up a top seed in the upcoming NCAA Tournament. The only thing standing in their way is BYU. Gonzaga handled them in their first matchup, and that was on BYU's home floor. I don't expect things to change now that they are at a neutral location. BYU does not have the defense to slow down this Bulldog attack. Gonzaga has been blowing people out all year, and will cruise to another easy win here. Give me Gonzaga to cover. 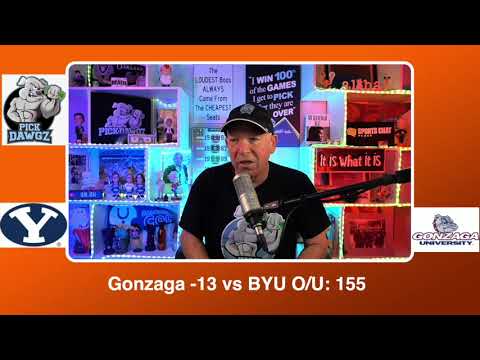