The Canisius Golden Griffins will be facing the Rider Broncos this Monday in the first round of the MAAC tournament. The two teams did not play during the regular season.

Canisius comes into this one having having split their two games at Siena. Before that they won three of four to start the road trip. In their most recent game against Siena, they came away with a 76-75 victory. Ahamadou Fofana led the team with 16 points. Malek Green chipped in with 12 points and 8 rebounds off the bench. The Golden Griffins shot 49.1% from the field and hit 13 of 14 free throws. The rebounds were dead even at 29, while the Golden Griffins had 2 more turnovers. Canisius is averaging 69.6 points per game while allowing 70.6 to their opponents. Malek Green leads the team with 13.2 points and 7.2 rebounds per game.

Rider heads into this game having lost 2 in a row on the road against the Monmouth Hawks. They have dropped 8 of their last 10 games, and are 5-16 on the year. Most recently against the Hawks, Rider fell 65-62 after being outscored 41-34 in the second half. They shot 39.3% from the field, and only assisted on 10 of 25 baskets. Dwight Murray Jr. led the team with 23 points and 11 rebounds. Rider held Monmouth to 39.6% shooting and 22.2% from three, but allowed them to get to the line often. The Hawks went 19-21 from the line which was one of the differences in the game. The battle of the boards was even at 38. Rider is averaging 67.4 points per game and surrendering 73.9 to the opposition.

Rider has been bad this year, and most of that has been in conference play. They have a few token wins over the bottom half of the division, but did not win at least two in a row all season. Canisius is heading into this one with some momentum, after finishing their season with a win against the top team in the conference. They also went 4-2 in their 6 road games to end the season, so they will be prepared to play at a neutral venue. Give me the Golden Griffins to cover at home. 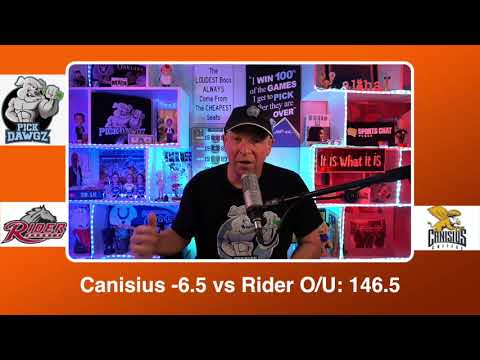