The Northern Kentucky Norse and the Oakland Golden Grizzlies will square off at the Indiana Farmers Coliseum in the Semifinals of the Horizon League Championship this Monday night.

The 4-seed Northern Kentucky was able to advance to the Semifinals after defeating the Detroit Mercy Titans, 70-69, this past Tuesday. Northern Kentucky trailed by a 69-64 margin with 3:45 left in regulation, however, the Norse were able to pull off the come from behind victory after closing out the rest of the game on a 7-0 run. Northern Kentucky shot 44.3% from the field and 29.0% from beyond the arc. Northern Kentucky lost the turnover battle by a 11-10 margin, however, won the rebounding battle by a 35-22 margin in the victory. Leading the way for the Norse was Marques Warrick who had 20 points, 3 rebounds, 2 assists, & 1 steal.

Defensively, Northern Kentucky is allowing their opponents to average 71.3 ppg on 45.1% shooting from the field. The Norse have a rebound margin of 0.9 and a turnover margin of 0.4.

Defensively, Oakland is allowing their opponents to average 82.1 ppg on 47.8% shooting from the field. The Golden Grizzlies have a rebound margin of -3.6 and a turnover margin of 0.8.

Northern Kentucky has won 9 of their last 11 games and have been led by their offense this season which ranks 160th in scoring offense & 115th in FG%. Oakland has struggled defensively this season as they currently rank just 334th in scoring defense & 325th in defensive FG%, however, the Golden Grizzlies have one of the more explosive offenses in the Horizon as they rank 83rd in scoring offense & 57th in three-pointers made per game. Oakland is a decent team, however, they are just 6-11 on the road this season & 0-2 in neutral games and as I like how Northern Kentucky has looked over the past few weeks, I think the play here is to take Northern Kentucky to cover this small spread. Good Luck! 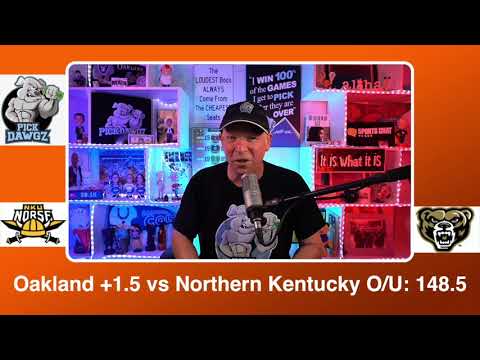