The Mercer Bears and UNC Greensboro Spartans will square off at the Harrah’s Cherokee Center in the SoCon Championship this Monday night.

Defensively, Mercer is allowing their opponents to average 71.9 ppg on 43.9% shooting from the field. The Bears have a rebound margin of 2.8 and a turnover margin of -0.5.

Defensively, UNC Greensboro is allowing their opponents to average 67.7 ppg on 41.4% shooting from the field. The Spartans have a rebound margin of 3.3 and a turnover margin of 3.2.

Mercer is a solid team, however, I think there were a bit fortunate against a tired VMI team (had 4 players play 42+ minutes the night before vs. Furman) and it is a bit concerning that their top player, Ross Cummings, has really struggled from the floor at the Harrah’s Cherokee Center. UNC Greensboro won both games against Mercer during the regular season and have been solid on both ends of the court as they come into this game ranked 114th in scoring offense & 96th in scoring defense. UNC Greensboro has the best player in the SoCon in Isaiah Miller and as I think the Spartans will have no trouble putting up some decent offense against Mercer’s 219th in scoring defense, I think the play here is to take UNC Greensboro to cover. Good Luck! 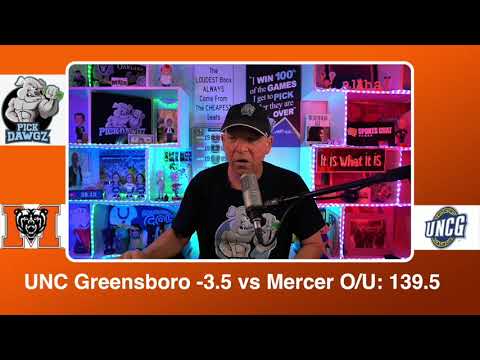