Where to Watch: Big12/ESPN+ Stream College Basketball all season on ESPN+. Sign up now!

Texas is coming off a 69-65 win over Oklahoma in its last game on the road on March 4th. Texas has now won two straight games and has won three of its last four games as well. Texas is currently ranked 15th in the nation, as the Longhorns are 16-7 overall and 10-6 in Big 12 play. Texas is also 9-13-1 against the spread this season. Texas' leading scorer so far this season has been G Andrew Jones, who has scored 14.8 points per game for the Longhorns. Texas as a team has scored 74.9 points per game and has shot the ball at a 44.9% clip from the field. Texas has also allowed 68.4 points per game to its opponents.

TCU is coming off a 76-67 loss to West Virginia in its last game on the road on March 4th. TCU has lost four of its last five games and is now 12-12 on the year. TCU has struggled in conference play, owning a 5-10 record in Big 12 play which puts the Horned Frogs in 8th place in the Big 12 standings. TCU is also 10-14 against the spread this season. TCU's leading scorer so far this season has been G RJ Nembhard, who has scored 16.0 points per game for the Horned Frogs. TCU as a team has scored 67.7 points per game and has shot the ball at a 43.9% clip from the field. TCU has also allowed 71.0 points per game to its opponents as well.

Texas opens as a 7-point favorite and the total is set at 140. Texas should win this game, but I do not like laying that many points in a rivalry game. TCU will look to play the role of spoiler and although I like Texas to win, I like TCU to cover. 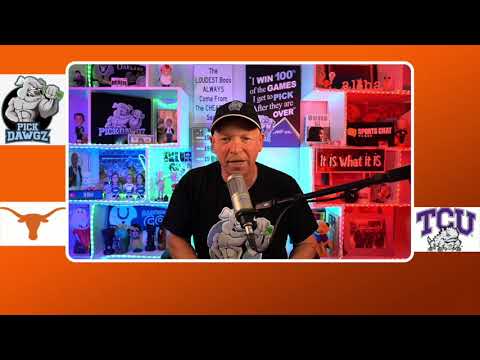