The Cincinnati Bearcats will travel to Williams Arena at Minges Coliseum to take on the East Carolina Pirates this Sunday Afternoon in College Basketball action.

The Cincinnati Bearcats lost their 2nd straight game and dropped to 9-10 on the season after being defeated by the Vanderbilt Commodores, 78-64, this past Thursday night. Cincinnati had no answers for the Commodores Scotty Pippen Jr. and could not fight back after the Commodores went into halftime with a 47-35 lead. Cincinnati shot 42.6% from the field and 36.0% from beyond the arc while Vanderbilt shot 51.0% from the field and 38.1% from beyond the arc. Cincinnati was outrebounded by Vanderbilt by a 33-24 margin and lost the turnover battle by a 18-16 margin in the loss. Leading the way for the Bearcats was Keith Williams who had 20 points, 2 rebounds, 1 assist, & 1 steal.

Defensively, Cincinnati is allowing their opponents to average 72.3 ppg on 44.2% shooting from the field. The Bearcats have a rebound margin of 1.4 and a turnover margin of -1.3.

The East Carolina Pirates lost their 3rd straight game and dropped to 8-9 on the season after being defeated by the UCF Knights, 64-60, this past Thursday night. East Carolina struggled on the offensive end in their first game in almost a month and could not fight back after the Knights took a 57-49 lead with 8:15 left in regulation. East Carolina shot 34.5% from the field and 36.4% from beyond the arc while UCF shot 43.1% from the field and 32.0% from beyond the arc. East Carolina was outrebounded by UCF by a 35-34 margin while each team committed 14 turnovers. Leading the way for the Pirates was Jayden Gardner who had 18 points, 7 rebounds, & 2 assists.

Defensively, East Carolina is holding their opponents to an average of 66.9 ppg on 41.7% shooting from the field. The Pirates have a rebound margin of -0.9 and a turnover margin of 1.8.

Cincinnati has lost 3 of their last 6 games and this is just a team that has not been good on either end of the court this season as they Bearcats come into this game ranked just 232nd in scoring offense & 228th in scoring defense. East Carolina played a decent UCF team tough considering it was their first game over the past month and although the Pirates can struggle offensively at times, the Pirates defense has been solid as they currently rank 82nd in scoring defense & 94th in defensive FG%. East Carolina has a great player in Jayden Gardner and between the fact that the Pirates have beaten Houston at home this season and Cincinnati has a losing record on the road, I think the play here is to take East Carolina and the points. Good Luck! 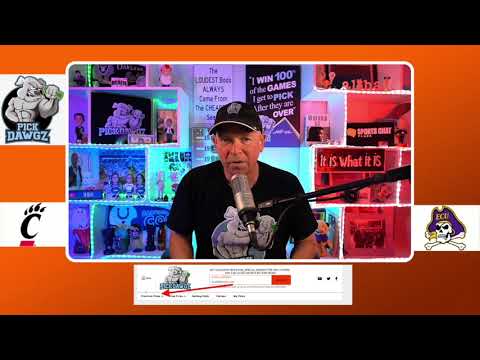