The Miami of Ohio Redhawks and Akron Zips face off on Friday in a college basketball showdown at the James A. Rhodes Arena.

The Miami of Ohio Redhawks come into this game with a 12-10record overall and coming into this game they have won four of their last five games. In the last game against Bowling Green it took overtime but they were able to come away with a 84-79 victory. The Redhawks have been struggling at times, but they are playing better as of late. Miami of Ohio is averaging 72.4 points per game while their defense is giving up 71.9 points per game. Miami of OHio is led by guard Dae Dae Grant who is averaging 13.7 points while shooting 41.2 percent from the field and 41.4 percent from behind the three point line.

On the other side of this matchup is the Akron Zips who sit with a 14-7 record overall but they have lost three games in a row. In the last game against Buffalo the offense was good putting 78 points but their defense gave up 80 points and that led to the defeat. Akron on the season is averaging 76.8 points per game while their defense is giving up 72.6 points per game. Loren Cristian Jackson has been the best player for Akron averaging 21.6 points while shooting 41.3 percent from the field and 34 percent from behind the three point line.

The Redhawks defense has been better as of late, and I expect Miami is going to allow that to happen in this game. Look for Miami of Ohio to keep this game lower scoring and the under will cash. Back the under to cash. 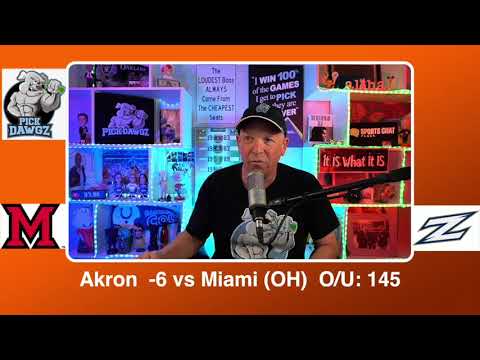