Fordham ended its regular season with a 68-40 loss to Saint Louis on February 13th. COVID-19 kept the Rams off the court for about three weeks, and now Fordham has to take on a prepared GWU team in the conference tournament. Fordham had a measly 2-11 record in conference play this season. Fordham's two wins during the regular season were against La Salle and Dayton. Fordham is also 6-7 against the spread this season. Fordham's leading scorer so far this season has been G Chris Austin, who has scored 11.4 points per game for the Rams. Fordham as a team has scored 52.0 points per game and has shot the ball at a 35.6% clip from the field. Fordham has also allowed 67.6 points per game to its opponents as well.

George Washington opens as a 5.5-point favorite and the total is set at 127. This has to be the worst spot in the universe for Fordham, as not only does this team struggle to score, but now the Rams have not been on the court since the middle of February. It should take Fordham a while to get going and by then, George Washington will be too far gone. I will lay the points with GWU here. 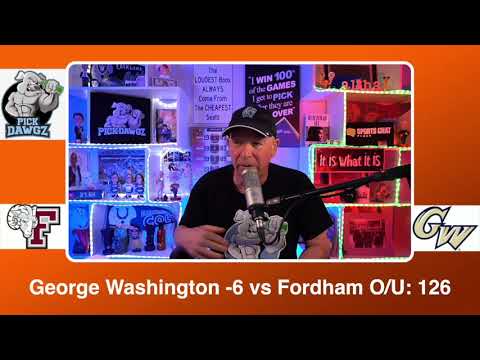