The Clemson Tigers and Syracuse Orange face off on Wednesday in a college basketball showdown at the Carrier Dome.

These two teams faced off at the beginning of February and it was Clemson that was able to win 78-61.

On the other side of this matchup is the Syracuse Orange who sit with a 14-8 record overall but they have lost two of their last two games. In the last game against North Carolina they almost blew it late but they won by two points. Syracuse on the season is averaging 76.1 points per game while their defense is giving up 71.5 points per game. Syracuse is averaging 43.9 percent from the field and they are shooting 32.9 percent from behind the three point line. Guard Buddy Boeheim has been the best player for Syracuse averaging 15.9 points while shooting 40.5 percent from the field and 36 percent from behind the three point line. In this game for Syracuse the defense is going to need to find a way to get step up.

The under is 16-4-1 in Clemson’s last 21 games played on Wednesday. The under is 7-1 in Syracuse’s last eight home games.

I expect the pace of this game is going to be slow, and Syracuse is going to want the defense to be good. Look for a lower scoring game that stays well under the total. Back the under to cash. 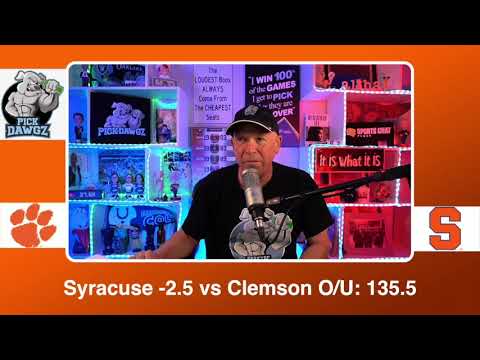