The TCU Horned Frogs snapped a 3-game losing streak and improved to 12-10 on the season after defeating the Iowa State Cyclones, 76-72, this past Saturday. TCU led by a 37-30 margin at halftime and was able to hang on late after taking a 72-68 lead on a Mike Miles layup with just :23 seconds left in regulation. TCU shot 43.9% from the field and 42.1% from beyond the arc while Iowa State shot 49.1% from the field and 39.1% from beyond the arc. TCU outrebounded Iowa State by a 33-28 margin and won the turnover battle by a 13-12 margin in the victory. Leading the way for the Horned Frogs was RJ Nembhard who had 19 points, 2 rebounds, 2 assists, & 3 steals.

Defensively, TCU is allowing their opponents to average 70.9 ppg on 44.6% shooting from the field. The Horned Frogs have a rebound margin of 1.0 and a turnover margin of -2.4.

The 18th ranked Texas Tech Red Raiders snapped their 3-game losing streak and improved to 15-8 on the season after defeating the 14th ranked Texas Longhorns, 68-59, this past Saturday. Texas Tech was lights out on the defensive end against Texas and had no trouble securing the victory after taking a 52-39 lead with 11:32 left in regulation. Texas Tech shot 44.0% from the field and 30.8% from beyond the arc while Texas shot 34.7% from the field and 29.2% from beyond the arc. Texas Tech outrebounded Texas by a 37-31 margin and won the turnover battle by a 12-11 margin in the victory. Leading the way for the Red Raiders was Kevin McCullar who had 10 points, 5 rebounds, 3 assists, 1 block, & 4 steals.

Defensively, Texas Tech is holding their opponents to an average of 63.2 ppg on 40.9% shooting from the field. The Red Raiders have a rebound margin of 2.7 and a turnover margin of 5.2.

TCU was able to pick up a much-needed win against Iowa State, however, this is a team that has struggled as of late, losing 8 of their last 11 games and come into this game below average on both sides of the ball as the Horned Frogs come into this game ranked just 252nd in scoring offense & t-197th in scoring defense. Texas Tech picked a much need win after dropping three tough games against West Virginia, Kansas, & Oklahoma State, and come into this game led by their defense which ranks 27th in scoring defense & 49th in defensive FG%. Texas Tech is a solid team, especially after getting back Kevin McCullar from injury, and between the fact that TCU is just 3-4 on the road and that I just do not see their offense having success on the road, I am taking Texas Tech to cover this double-digit spread. Good Luck! 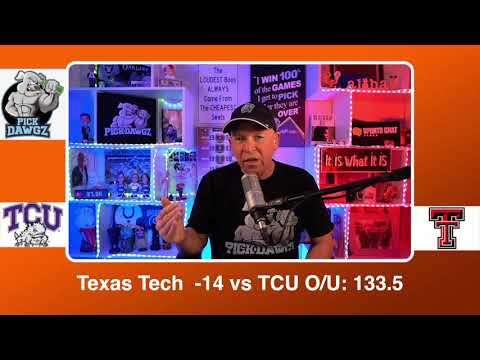