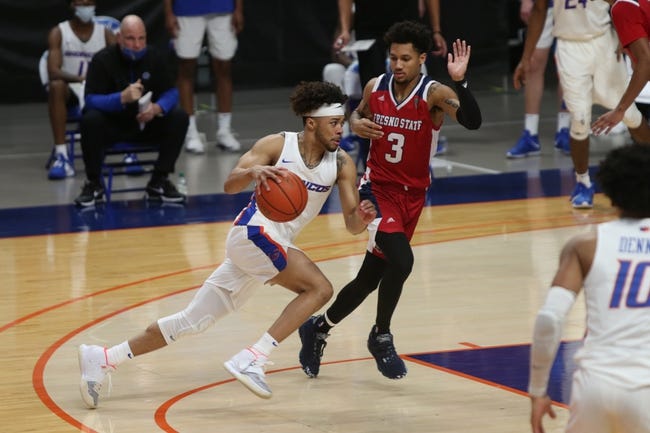 The Fresno State Bulldogs will travel to ExtraMile Arena to take on the Boise State Broncos this Tuesday night in College Basketball action.

The Fresno State Bulldogs dropped to 10-10 on the season after being defeated by the UNLV Rebels, 68-67, this past Friday night. Fresno State led by a 40-32 margin at halftime, however, the Bulldogs offense struggled in the 2nd half and could not fight back after UNLV took a 64-63 lead with 4:41 left in regulation. Fresno State shot 45.7% from the field and 47.6% from beyond the arc while UNLV shot 47.4% from the field and 38.1% from beyond the arc. Fresno State was outrebounded by UNLV by a 28-27 margin and lost the turnover battle by a 12-9 margin in the loss. Leading the way for the Bulldogs was Junior Ballard who had 17 points, 3 rebounds, & 3 assists.

Defensively, Fresno State is holding their opponents to an average of 67.4 ppg on 43.4% shooting from the field. The Bulldogs have a rebound margin of 3.7 and a turnover margin of -1.2.

Defensively, Boise State is holding their opponents to an average of 65.4 ppg on 42.4% shooting from the field. The Broncos have a rebound margin of 3.6 and a turnover margin of 3.3.

Fresno State comes into this game with a decent defense, however, the Bulldogs have had trouble overcoming little to no production on the offensive end as Fresno State comes into this game currently ranked just 279th in scoring offense, 233rd in FG%, & 272nd in 3P-FG%. Boise State could not pick up a key victory in either of their games at San Diego State, however, this is still a very good basketball team that ranks 66th in scoring offense & 56th in scoring defense. Boise State has top-25 level talent and between the fact that they are playing for an at-large bid if they cannot win the Mountain West and that they are a perfect 11-0 at home this season, I think the Broncos come out strong in this one and do enough to cover this double-digit home spread. Good Luck!