The Duke Blue Devils will travel to McCamish Pavilion to take on the Georgia Tech Yellow Jackets this Tuesday night in College Basketball action.

The Duke Blue Devils had their 4-game winning streak snapped and dropped to 11-9 on the season after being defeated by the Louisville Cardinals, 80-73 (OT), this past Saturday night. Duke was able to fight back from a 36-26 halftime deficit to force OT, however, the Blue Devils defense struggled in OT and could fight back after a Carlik Jones jumper gave Louisville a 76-71 lead with :37 seconds left in OT. Duke shot 44.8% from the field and 19.0% from beyond the arc while Louisville shot 45.5% from the field and 33.3% from beyond the arc. Duke was outrebounded by Louisville by a 41-33 margin while each team committed 12 turnovers. Leading the way for the Blue Devils was Matthew Hurt who had 37 points, 7 rebounds, 1 block, & 1 steal.

Defensively, Duke is allowing their opponents to average 71.6 ppg on 46.1% shooting from the field. The Blue Devils have a rebound margin of 2.2 and a turnover margin of 0.7.

The Georgia Tech Yellow Jackets won their 4th straight game and improved to 13-8 on the season after defeating the Syracuse Orange, 84-77, this past Saturday. Georgia Tech trailed by a 39-34 margin at halftime, however, the Yellow Jackets were outstanding offensively in the 2nd half and pulled away after taking a 75-61 lead with 4:35 left in regulation. Georgia Tech shot 50.0% from the field and 27.8% from beyond the arc while Syracuse shot 45.2% from the field and 33.3% from beyond the arc. Georgia Tech outrebounded Syracuse by a 41-36 margin and won the turnover battle by a 14-13 margin in the victory. Leading the way for the Yellow Jackets was Moses Wright who had a double-double with 31 points, 16 rebounds, 2 assists, 1 block, & 2 steals.

Defensively, Georgia Tech is allowing their opponents to average 70.0 ppg on 45.6% shooting from the field. The Yellow Jackets have a rebound margin of -3.8 and a turnover margin of 4.4.

Duke has played themselves back into conversation of making the NCAA tournament after a 4-game winning streak that included a win against Virginia, however, this is still a team that just has not looked great all season and has struggled defensively as the Blue Devils rank just t-215th in scoring defense & 281st in defensive FG%. Georgia Tech has been playing some of their best basketball of the season as of late and have been solid offensively this season as the Yellow Jackets come into this game ranked 81st in scoring offense & 40th in FG%. Georgia Tech has one of the best players in the country in Moses Wright, who had been absolutely on a tear as of late, and between the fact that I just do not see anyone on the Devils that will be able to contain Wright and for the fact that Duke is just 3-4 on the road this season, I am taking Georgia Tech to cover this small home spread. Good Luck! 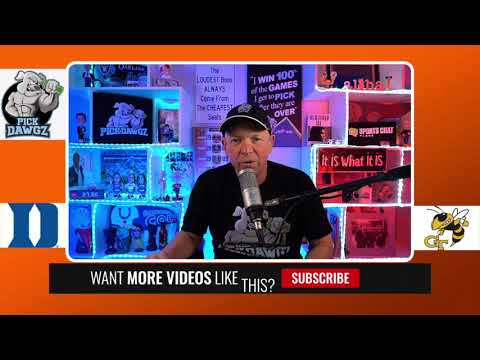