The Arkansas Razorbacks and South Carolina Gamecocks face off on Tuesday in a college basketball showdown at Colonial Life Arena.

The Arkansas Razorbacks come into this game with a 19-5 record overall and coming into this game they have won six games in a row. In the last game the defense gave up 75 points to LSU which was the difference as they won by eight points. Arkansas on the season is averaging 82.4 points while their defense is giving up 70.2 points per game. Arkansas likes to push the pace and they need to do that again in this game. Moses Moody has been the best player for Arkansas averaging 16.6 points while shooting 42.1 percent from the field.

On the other side of this matchup is the South Carolina Gamecocks who sit with a 6-12 record overall and coming into this game they have lost six of their last seven games. The one win during that stretch came in their last game against Georgia by 21 points. The offense in the last game put up 91 points. South Carolina on the season is averaging 73.7 points per game while their defense is giving up 77.4 points per game. Three different players are averaging at least 10 points per game. AJ Lawson has been the best player for South Carolina averaging 17.4 points while shooting 41.1 percent from the field and 38.2 percent from behind the three point line.

Arkansas is going to find enough defensive success to slow down South Carolina and that will be the difference in this game. Look for a low-scoring game that cashes the under. 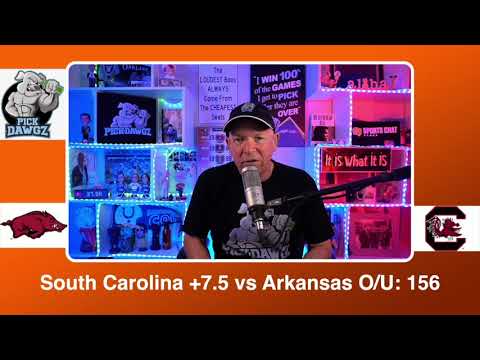