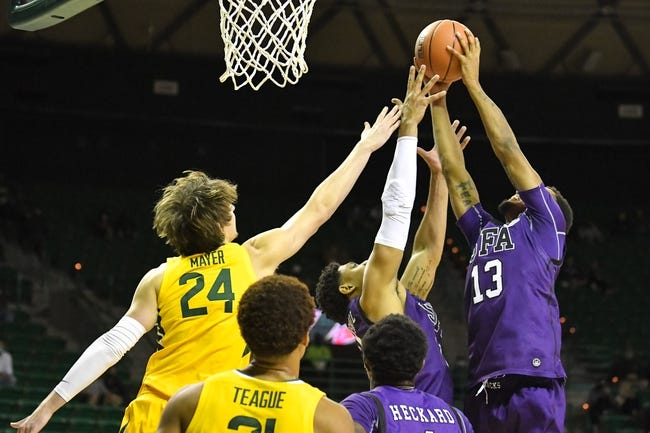 Where to Watch: https://ucasports.com Stream College Basketball all season on ESPN+. Sign up now!

The Stephen F. Austin Lumberjacks will travel to the Farris Center to take on the Central Arkansas Bears this Monday afternoon in College Basketball action.

The Stephen F. Austin Lumberjacks had their 5-game winning streak snapped and dropped to 14-4 on the season after being defeated by the Lamar Cardinals, 88-83 (2OT), this past Saturday. Stephen F. Austin struggled with turnovers against Lamar and could not fight back in double-OT after the Cardinals took an 86-82 lead with 2:33 left in double-OT. Stephen F. Austin shot 44.4% from the field and 58.3% from beyond the arc while Lamar shot 43.2% from the field and 33.3% from beyond the arc. Stephen F. Austin was outrebounded by Lamar by a 42-39 margin and committed 22 turnovers in the loss. Leading the way for the Lumberjacks was Gavin Kensmil who had a double-double with 18 points, 17 rebounds, 3 assists, & 3 blocks.

Defensively, Stephen F. Austin is allowing their opponents to average 72.0 ppg on 44.8% shooting from the field. The Lumberjacks have a rebound margin of 7.3 and a turnover margin of 1.4.

Defensively, Central Arkansas is allowing their opponents to average 81.1 ppg on 45.1% shooting from the field. The Bears have a rebound margin of 1.1 and a turnover margin of -6.0.

Central Arkansas was able to pull off an incredible upset at home against Abilene Christian, however, I find it hard to imagine that the Bears can put back-to-back solid performances together as this is still the same team that currently ranks 202nd in scoring offense, 332nd in scoring defense, & 249th in defensive FG%. Stephen F. Austin has not been great ATS as of late and is also coming off an upset loss, however, this is a Lumberjacks team that can really score the basketball as they come into this game ranked 13th in scoring offense & 2nd in FG% and as I think Stephen F. Austin will be able to put up 80+ points up against the Bears, I am taking Stephen F. Austin to cover this double-digit road spread. Good Luck!