Miami is coming off a 66-58 loss to Clemson in its last game on the road on February 27th. Miami has now lost five straight games and only had one win in the month of February (February 1st over Duke). Miami has had to deal with injuries all season long and is 7-15 overall with a 3-14 conference record. Miami is also 10-12 against the spread this season. Miami's leading scorer so far this season has been G Isaiah Wong, who has scored 17.8 points per game for the Hurricanes. Miami as a team has scored 66.0 points per game and has shot the ball at a 41.9% clip from the field. Miami has also allowed 71.4 points per game to its opponents as well.

Virginia opens as a 15-point favorite and the total is set at 125. Here we have two different teams in two different directions. Miami is virtually waving the white flag on this season, while Virginia will look to stop the downward spiral it is currently on. Virginia cannot let this game slip, so I will lay the points with the home favorite. 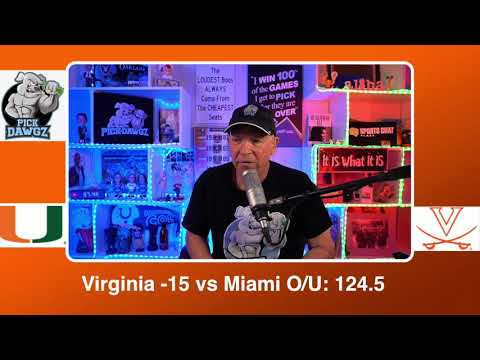