The Butler Bulldogs will play host to the Villanova Wildcats this Sunday. Villanova won the previous game between these two by a score of 85-66. Villanova is the 9th ranked team in the nation and first in the Big East.

Butler heads into this one having won their last game against Seton Hall. They had lost their three games prior. At home against Seton Hall, Butler won a low scoring game 61-52. The Bulldogs shot 45.7% from the field and 25% from three. They hit 15 of their 16 free throw attempts. The Bulldogs assisted on 11 of 21 field goals. Jair Bolden led the way for Butler with 16 points and 6 rebounds. Chuck Harris had a solid game as well, with 14 points, 5 assists and 6 rebounds. Butler held Xavier to 37.9% shooting from the field. The Bulldogs also won the rebound battle by 8, and committed 4 less turnovers. For the year Butler is averaging 62.7 points per game, while allowing 67 to the opposition. Chuck Harris leads the team with 11.6 points per game.

After winning last their last game against Saint Johns, Villanova has now won 3 of 4. Against Saint Johns, Villanova cruised to an 81-58 victory. The Wildcats shot 48.3% from the field, and went 11-26 beyond the arc. They assisted on 20 of their 29 field goals. Caleb Daniels was the leading scorer with 17, while Jermaine Samuels had a big game with 14 points, 4 assists and 9 rebounds. The Wildcats limited Saint Johns to 3-23 shooting from three. They also grabbed 7 more rebounds in the game. On the Season, Villanova is averaging 78.1 points per game while giving up 67.7 to their opponents. Jeremiah Robinson-Earl leads the team with 15.4 points and 7.4 rebounds per game.

In the last matchup between these two teams, Villanova won by 19 despite Butler having one of their better shooting games of the season. They shot 48.9% from the field while averaging 40% for the season. In their last three games, they have shot less than 30% from three. Villanova has held each of their last two opponents to under 30% shooting from deep. Villanova will make life difficult for Butlers offense all game. With the offense firing on all cylinders, they should have no trouble pulling away in the second half. Give me Villanova to cover on the road. 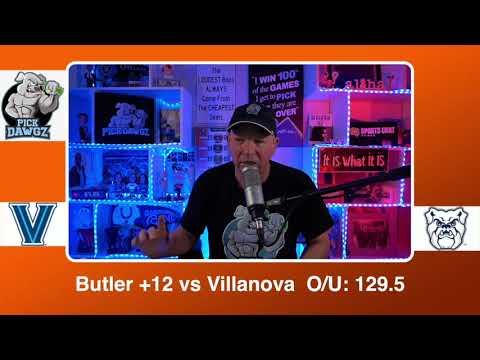