The Memphis Tigers will go on the road to face the Cincinnati Bearcats this Sunday. This will be the first matchup between the teams this season.

Cincinnati comes into this win having won 6 of their last 7 games. In their last game against Tulane, they came away with a 91-71 victory. The Bearcats shot 50.8% from the field, and assisted on 23 of their 33 field goals. They also hit 15 of their 17 free throws. Jeremiah Davenport led the way for the Bearcats with 27 points to go with 5 assists. Mika Adams-Woods had a nice game as well with 16 points and 7 assists. Cincinnati outrebounded Tulane 39-25 in the game. The Bearcats are averaging 69.2 points per game while giving up 71.2 to their opponents this season. Keith Williams leads the team with 14.4 points per game.

Memphis heads into this one having won 4 straight, also winning most recently against Tulane. In that one the Tigers did not shoot the ball well, but got by with stellar defense. They only hit 38.9% from the field, and 29.4% from three. However, Tulane was much worse only hitting 25.9% of their shots and 10.5% from three. Memphis also dominated the glass, outrebounding Tulane 53-29. The one blemish for Memphis were the 26 turnovers committed. Memphis spread the wealth when it came to scoring, and only had one player score in double figures. Boogie Ellis led the way with 13. For the season, the Tigers are averaging 72.1 points per game while allowing 61 points to the opposition. Landers Nolley II leads the team with 13.4 points per game. Big man Moussa Cisse is averaging 7.1 rebounds and 2 blocks per game.

Cincinnati shot the ball well in their last game, but are only hitting 29.7% of their three point attempts this season. Memphis has been playing solid defense to close out the season, and will limit easy opportunities for the Bearcats. Cincinnati has given up at least 70 points in the last 3 games, so Memphis should be able to get back on track offensively. Give me the Tigers cover. 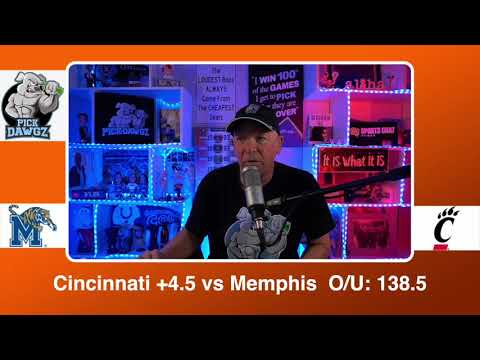