The Texas Tech Red Raiders will host the Texas Longhorns in a Big 12 battle this Saturday. Texas Tech (18), and Texas (14) are both ranked in the top 20 and looking to bolster their tournament resume. The Red Raiders won their previous matchup on the road by a score of 79-77.

Texas Tech heads into this game having lost three straight. The first was at home versus West Virginia, and the next two were on the road against Kansas and Oklahoma State. In their most recent tilt against Oklahoma State, the Red Raiders lost by a score of 74-69. They shot 42.3% from the field in the game, 33.3% from deep. Texas Tech had assists on 11 of 28 field goals. Terrence Shannon Jr. led the way off the bench with 18 points. Texas Tech lost the rebound battle 37-32, but committed 6 less turnovers. They also held the Cowboys to 2-12 shooting from three. On the season the Red Raiders are averaging 73.4 points per game, while surrendering 63.4 to their opponents. Junior Mac McClung leads the team with 16.9 points per game.

The Longhorns are coming into this game winners of 3 in their last 4. In their latest game, Texas came away with a 75-72 win at home against Kansas. The Longhorns only shot 37.7% from the field in the game, while hitting just 5 of 26 attempts from three. Of their 23 field goals, 12 came via the dime. Courtney Ramey led the way with 15 points, hitting all 8 of his free throw attempts. Andrew Jones added 13 points and 10 rebounds, but only shot 21.4% from the field. Texas held the Jayhawks to 40% shooting from the field. They also controlled the glass, outrebounding Kansas by 12. Texas is averaging 75.7 points per game, while allowing 68.7 points per game to their opponents this season. Andrew Jones leads the team with 15.4 points per game.

Both of these teams have very good wins on their respective resumes, playing in a stacked Big 12 conference. In their last game, Texas shot the ball better than the Red Raiders, but lost the game due to committing more than double the turnovers. Texas Tech is a similar team on the road to the one they are at home, so the change of venue will do little to sway the outcome. Andrew Jones has been shooting the ball well of late for Texas, and he had a big game in their last matchup. This should be a low scoring affair that comes down to the last possession. I like the value with Texas and the points. 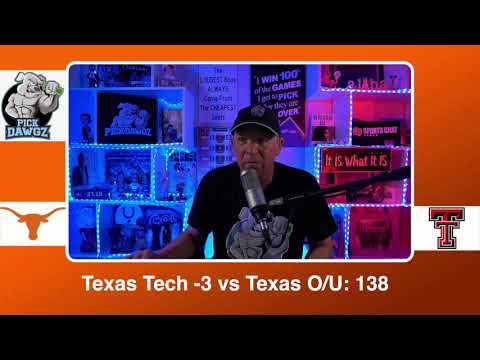