The Connecticut Huskies will be hosting the Marquette Golden Eagles in a Big East Matchup. Connecticut came away with a 65-54 victory at Marquette in their only other matchup this season.

Connecticut has won 3 of their last 4 games. In their most recent game at Georgetown, they came away with a 70-57 victory. The Huskies shot 45.5% from the field, but only hit 2 of 11 three point attempts. They assisted on 12 of their 30 field goals. James Bouknight continued his solid play in this one, leading the team with 20 points and 10 rebounds. The Huskies limited the Hoyas to 35.8% shooting and 21.1% from three. Connecticut also had 8 steals, 5 blocks, and grabbed 16 more rebounds than Georgetown in the game. The Huskies are averaging 70.5 points per game while surrendering 64.8 to their opponents. James Bouknight leads the team with 20.1 points per game, but has only played in 9 games this season.

Marquette has won two straight on the road, highlighted by an impressive 83-70 victory against the Tar Heels. In their last game against UNC, Marquette converted at a high percentage hitting 51.8% of their shots, and 37.5% from beyond the arc. Of their 29 makes, 15 came via assist. Big man Dawson Garcia had a great game, leading the team with 24 points and 11 rebounds. The Golden Eagles defense limited the Tar Heels to 41.7% shooting and 27.8% from three. Marquette committed one less turnover in the game, but grabbed one less rebound. On the season the Golden Eagles are averaging 70.8 points per game, and allowing 69.9 to their opponents. Dawson Garcia leads the team with 13.1 points and 6.7 rebounds per game.

Marquette lost the last game between these two by 11, despite taking an 8 point lead into the half. Connecticut shot 50% from three in that game. I don't expect a repeat performance in that regard, but having Bouknight back in this game should be able to offset that. He has scored at least 20 in his last two since being returned to the starting lineup. After two good road wins this has the making of a letdown game for Marquette. Relying on their defense Connecticut should be able to pull away late at home. Give me Connecticut to win and cover. 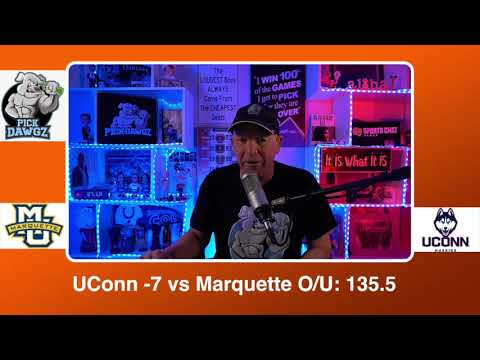