The Illinois Fighting Illini and Wisconsin Badgers face off on Saturday in a college basketball showdown at the Kohl Center.

These two teams faced off earlier this season and it was Illinois that came away with a 75-60 victory.

The Illinois Fighting Illini come into this with a 17-6 record overall and coming into this game they have won eight of their last nine ten games. The only loss was two games against MIchigan State, a game they gave up 81 points in. Illinois on the season is averaging 81.5 points per game while their defense is giving 69.2 points per game. Illinois is shooting 50 percent from the field and 37.8 percent from behind the three point line. One big issue for Illinois is they are without their star Ayo Dosunmu who is dealing with a facial fracture. They didn’t have him the last game, and Illinois was able to win 86-70. Forward Kofi Cockburn will be the top available player for Illinois averaging 17.7 points per game.

On the other side of this matchup is the Wisconsin Badgers who sit with a 16-8 record overall but coming into this game they have lost two of their last three games. The one win during that stretch was in their last game against Northwestern Wildcats, a game they gave up only 51 points in. Wisconsin on the season is averaging 69.8 points per game while their defense is giving up 62.7 points per game. D’Mitrik Trice has been the best player for Wisconsin and coming into this game he is averaging 13.5 points while shooting 41.2 percent from the field.

Illinois even without Dosunmu is the better team and they are going to have no issue getting the job done in this game. Look for Illinois to have success scoring again and Wisconsin isn’t going to keep up. Back Illinois against the spread. 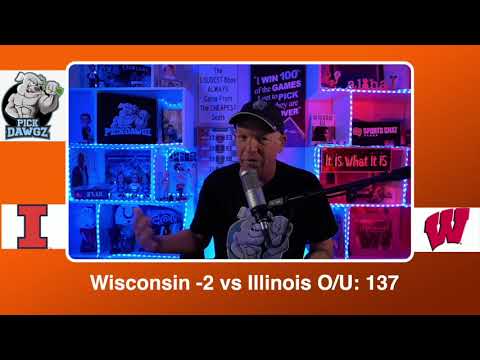