The Saint Louis Billikens will be hosting the Richmond Spiders in a conference matchup. This is their first matchup of the season. Both teams are currently fighting for their tournament lives and need this win stay in the mix.

Saint Louis heads into this game having lost their last two games. In their most recent game, the Billikens lost a close one at VCU 67-65. The Billikens shot 42.1% from the field, and 30% from three. They had assists on 11 of their 24 field goals. Hasahn French led the way for Saint Louis with 21 points and 8 rebounds. The Billikens controlled the glass in this game, winning the rebounding battle 43-28, including 14 offensive. On the season they are averaging 76.1 points per game, while allowing 64.6 to their opponents. Javonte Perkins leads the team with 17.1 points per game. Jordan Goodwin has lead the way defensively, leading the team with 10.5 rebounds and 1.9 steals per game from the guard position.

Richmond will come into this game having won 2 in a row and 4 of 5. Last game against UMass, Richmond came away with a 79-65 home victory. The Spiders shot 47.5% from the field and 35% from deep. They had assists on 17 of 28 field goals. Blake Francis led the way for Richmond with 20 points, hitting 5 of 9 threes. Nathan Cayo chipped in with 18 points and 7 boards. Richmond had 6 more rebounds than the Minuteman, and committed 7 less turnovers. They also limited the Minutemen to 7-27 shooting from beyond the arc. On the season Richmond is averaging 76.2 points per game, while allowing 68.8 to their opponents. Francis leads the team with 16.6 points per game. Jacob Gilyard has been a spark for the Spiders, leading the team with 5.3 assists and 3.6 steals per game.

Saint Louis lost their last two games, but head home where they are 10-1 this season. They are a different team at home, having beaten conference leading SBU by 11 earlier in the month. Richmond has been playing well on the road, but Saint Louis is one of the best home teams in the conference. Give me Saint Louis to bounce back and get the win, doing enough to cover the modest spread. 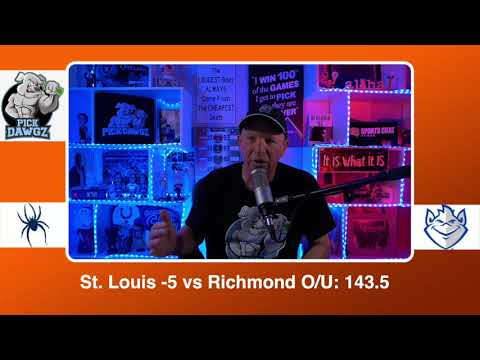