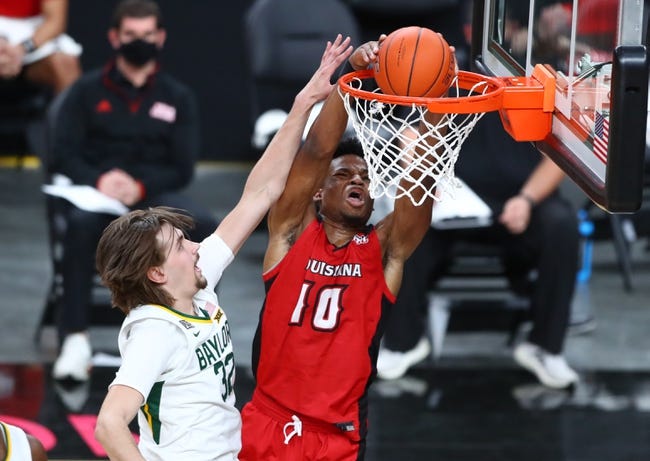 The Louisiana Ragin’ Cajuns will travel to the Jack Stephens Center to take on the Little Rock Trojans this Friday night in College Basketball action.

The Louisiana Ragin’ Cajuns won their 2nd straight game and improved to 15-7 on the season after defeating the UT-Arlington Mavericks, 76-74, this past Monday night. Louisiana trailed for most of the 2nd half, after the Ragin’ Cajuns defense came up big late and Louisiana was able to get the victory after Cedric Russell made a pair of FT’s with just :09 seconds left in regulation. Louisiana shot 41.1% from the field and 37.5% from beyond the arc while UT-Arlington shot 39.7% from the field and 34.8% from beyond the arc. Louisiana outrebounded UT-Arlington by a 43-36 margin and committed 12 turnovers in the victory. Leading the way for the Ragin’ Cajuns was Cedric Russell who had 26 points & 2 rebounds.

Defensively, Louisiana is allowing their opponents to average 73.2 ppg on 42.8% shooting from the field. The Ragin’ Cajuns have a rebound margin of 5.5 and a turnover margin of -3.1.

The Little Rock Trojans lost their 6th straight game and dropped to 10-13 on the season after being defeated by the UL Monroe Warhawks, 68-64, this past Monday. Little Rock led by a 45-36 margin early in the 2nd half, however, the Trojans offense struggled down the stretch and the Warhawks were able to take the lead for good after a pair of FT’s by Marco Morency gave UL Monroe a 66-64 lead with :59 seconds left in regulation. Little Rock shot 40.7% from the field and 22.2% from beyond the arc while UL Monroe shot 42.9% from the field and 43.5% from beyond the arc. Little Rock outrebounded UL Monroe by a 40-28 margin, however, lost the turnover battle by a 15-12 margin in the loss. Leading the way for the Trojans was Marko Lukic who had 20 points & 3 rebounds.

Defensively, Little Rock is allowing their opponents to average 69.1 ppg on 44.5% shooting from the field. The Trojans have a rebound margin of 2.9 and a turnover margin of -1.0.

Louisiana has played well during the 2nd half of their season, winning 7 of their last 10 games, and has been led by their offensive that ranks 83rd in scoring offense, 115th in FG%, & 82nd in 3P-FG%. Little Rock was expected to be one of the better Sun Belt teams this season, however, it has been a struggle for the Trojans as they have lost 7 of their last 10 games and currently rank just 229th in scoring offense & 228th in defensive FG%. Little Rock has looked lost over the past three weeks, especially on the offensive end of the ball, and as I think Ragin’ Cajuns, who have a 5-3 road record, are just playing the better basketball as of right now, I think the play here is to take the Ragin’ Cajuns and the points. Good Luck!