The Oregon Ducks will travel to Maples Pavilion to take on the Stanford Cardinal this Thursday night in College Basketball action.

The Oregon Ducks had their 5-game winning streak snapped and dropped to 14-5 on the season after being defeated by the 19th ranked USC Trojans, 72-58, this past Monday night. Oregon has no answers on either side of the court for USC in the first half and could not fight back after going into halftime trailing by a 43-22 margin. Oregon shot 40.4% from the field and 41.2% from beyond the arc while USC shot 49.1% from the field and 47.6% from beyond the arc. Oregon was outrebounded by USC by a 39-25 margin and committed 16 turnovers in the loss. Leading the way for the Ducks was Chris Duarte who had 11 points, 5 rebounds, 4 assists, & 2 steals.

Defensively, Oregon is holding their opponents to an average of 66.5 ppg on 41.7% shooting from the field. The Ducks have a rebound margin of 1.6 and a turnover margin of 2.3.

The Stanford Cardinal had their 2-game winning streak snapped and dropped to 14-9 on the season after being defeated by the Washington State Cougars, 85-76 in 3OT, this past Saturday. Washington State was able to force OT on a Noah Williams three-pointers with just :06 seconds left in regulation and was able to easily pull away in triple-OT after holding the Cardinal scoreless for the entire triple-OT period. Stanford shot 51.7% from the field and 41.2% from beyond the arc while Washington State shot 36.0% from the field and 32.5% from beyond the arc. Stanford was outrebounded by Washington State by a 48-36 margin and committed 23 turnovers in the loss. Leading the way for the Cardinal was Michael O’Connell who had 17 points, 6 rebounds, 7 assists, & 2 steals.

Defensively, Stanford is allowing their opponents to average 68.7 ppg on 40.4% shooting from the field. The Cardinal have a rebound margin of 1.2 and a turnover margin of -0.2.

Oregon has been playing some better basketball as of late, despite their recent loss at USC, however, I think Stanford is a tough matchup for the Ducks as the Cardinal come into this game ranked 34th in scoring offense & 41st in scoring defense. Stanford got a big boast back in the lineup recently with Daejon Davis back from injury and as I think the Cardinal offense has some success on their home court, I am taking Stanford to cover this small spread. Good Luck! 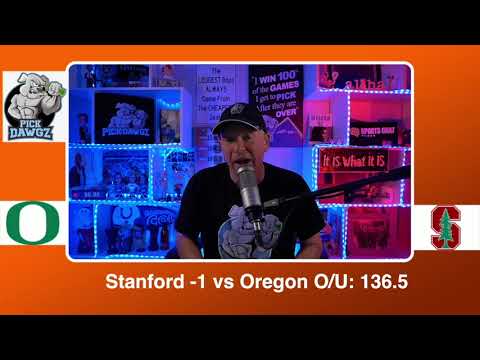