The NC State Wolfpack and Virginia Cavaliers face off on Wednesday in a college basketball showdown at John Paul Jones Arena.

The NC State Wolfpack have been really inconsistent this year and coming into this game they sith with a 10-9 record overall. Even with the struggles at times, they have won two games in a row on the road against Pitt and Wake Forest. In the last game against Wake Forest it was the offense that was the difference putting up 80 points and that led to a victory. NC State on the season is averaging 73.8 points per game while their defense is giving up 70.3 points per game. The defense has been inconsistent at times, this season and that has been a big problem for this team. Jericole Hellems has been the best player for this team averaging 13.3 points while shooting 48.1 percent from the field and 34.5 percent from behind the three point line.

On the other side of this matchup is the Virginia Cavaliers who sit with a 15-5 record overall but they have lost two games in a row. In the last game against Duke, Virginia was competitive but late in the game they couldn’t make the shots and that led to a one point loss. Virginia is a defense first team and overall this season they are giving up only 60.2 points per game.On offense VIrginia is averaging 69.2 points per game, but their offense has been inconsistent, and they are going to need the offense to be good in this game. Forward Sam Hauser has been the best player for Virginia this season averaging 15.1 points per game.

Look for Virginia to really try to keep the pace slow and that is going to lead to this game being low scoring. There isn’t a strong play either way on the side, but the under is going to cash with ease. 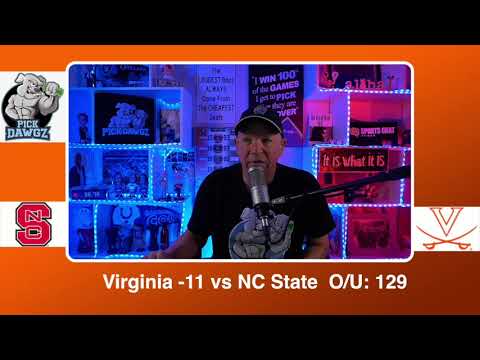