The Rutgers Scarlet Knights will be hosting the Indiana Hoosiers this Wednesday in a Big Ten matchup. The Scarlet Knights won the previous game between these two earlier in the season. It was a close game, and Vegas is expecting the same with a 3 points spread.

Rutgers is coming into this game having lost two straight. In their last game against Maryland, it was an off night shooting and the Scarlet Knights fell by a score of 68-59. They shot 38.2% from the field overall, and only converted 5-22 attempts from three. They also committed 15 turnovers in the game, slightly above their season average of 11 per game. Jacob Young led the way for Rutgers with 19 points in the game. Geo Baker chipped in with 12 points to go along with 8 rebounds and 2 steals. On the season Rutgers is averaging 70.9 points per game while surrendering 68 per game to their opponents. Ron Harper Jr. leads the way for the team with 15.5 points per game. Myles Johnson has had a solid year as the featured big man. The 6'11 junior is shooting an efficient 66.4%, and averages 8.5 rebounds and 2.1 blocks per game.

Indiana has flip flopped wins and losses in their last 4, losing their last game at home against Michigan State. They went into halftime with a four point lead, but got torched for 52 points in the second half en route to a 7 point loss. The Hoosiers shot 43.8% from the field in the game, but were dreadful from three. They shot 21.1% from deep, compared to the 34.6% they are averaging on the year. MSU shot the ball much better, shooting 49.2% and hitting 7-17 from beyond the arc. Trayce Jackson-Davis had a monster game for the Hoosiers, putting up 34 points to go along with 9 rebounds and 2 blocks. He leads the team in all three categories, averaging 20.2 points, 9.4 rebounds, and 1.5 blocks per game on the year. Indiana is averaging 72.5 points per game while surrendering 69.7 to their opponents.

In their last matchup, Rutgers was able to hold Jackson-Davis to 13 points on 4-10 shooting. As Jackson-Davis goes, so has Indiana, so the key for Rutgers will be limiting his chances. Myles Johnson and company did a good job on him in the last game, and I expect similar results in this one. Give me Rutgers to cover at home. 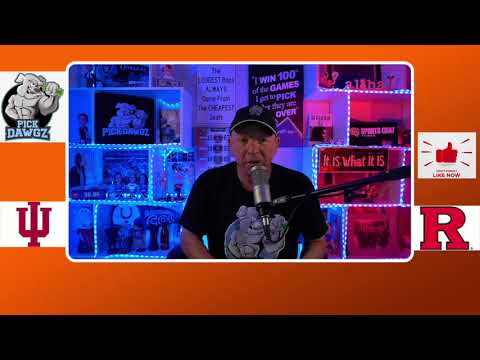