The Villanova Wildcats will host the St. John's Red Storm Tuesday night in a Big East battle. St. John's won the last game between these two by a score of 70-59.

Since their last meeting, the Red Storm have gone 2-2. They lost their last game at home against Depaul by a score of 88-83. St John's did not shoot the ball well in that game, as they were only able to convert on 33.8% of their shots. If it was not for 18 offensive rebounds on the night, this may not have been a close game. Julian Champagnie led the way again for the Red Storm, putting up 29 points and hitting 5 of 12 threes. He is averaging 20.2 points per game this year. St John's is averaging 80.1 points per game this year.

The Red Storm's defense was porous against Depaul. They were scorched by the Demons, allowing them to shoot 63% from the field. The Red Storm were however able to win the turnover battle by ten, forcing 24 in the game. St. John's is allowing 77.2 points per game this season.

The Wildcats are coming into this game having won three of four since their last meeting with St John's. Their lone loss in the span was on the road against a 19th ranked Creighton team. In their last game, Villanova came away with a win against the Connecticut Huskies. Collin Gillespie led the way for Villanova with 20 points, and hit some key shots late to seal the game. The Wildcats shot 41.5% from the field, and only 22.7% from deep. On the season they are averaging 77.9 points per game. Jeremiah Robinson-Earl leads the team with 15.6 points per game.

Villanova was great on the defensive end in their last game, allowing only 60 points in the game on 36.4% shooting. They had 7 steals in the game, and pulled down two more boards than the Huskies. On the season Villanova is allowing an average of 68.2 points per game. Robinson-Earl leads the team with 7.5 rebounds per game.

Villanova comes into this game having shot the ball poorly in their last two games. St. Johns is able to put up points in bunches, and can spread the floor with a plethora of three point shooters. The Red Storm knocked down 10 threes in the last meeting. Villanova plays well at home, and should find a way to win this game. However, St John's will be able to ride their offense and keep this game close. Their only two losses by double digits this season came against Creighton's explosive attack. Give me St John's to keep it within 10. 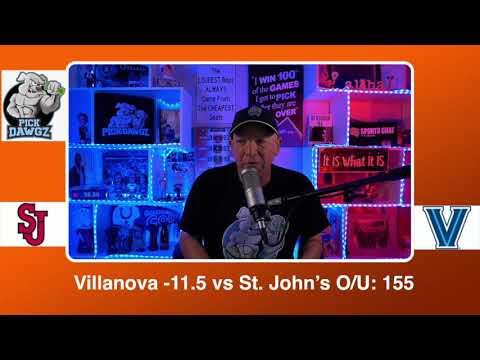