The Saint Louis Billikens will travel to the Stuart C. Siegel Center to take on the VCU Rams this Tuesday night in College Basketball action.

The Saint Louis Billikens had their 4-game winning streak snapped and dropped to 11-4 on the season after being defeated by the Dayton Flyers, 76-53, this past Friday night. Saint Louis had no answers on the offensive end against the Dayton defense and could not fight back after going into halftime trailing by a 43-23 margin. Saint Louis shot just 27.1% from the field and 22.6% from beyond the arc while Dayton shot 50.0% from the field and 36.4% from beyond the arc. Saint Louis outrebounded Dayton by a 45-38 margin, however, lost the turnover battle by a 15-12 margin. Leading the way for the Billikens was Javonte Perkins who had 7 points, 7 rebounds, 3 assists, & 1 block.

Defensively, Saint Louis is holding their opponents to average 64.4 ppg on 40.6% shooting from the field. The Billikens have a rebound margin of 8.4 and a turnover margin of 2.9.

Defensively, VCU is holding their opponents to an average of 65.2 ppg on 40.6% shooting from the field. The Rams have a rebound margin of 0.1 and a turnover margin of 2.3.

Saint Louis did not look good in their recent game against Dayton, but this is still a very good Billikens team that comes into this matchup with the 64th ranked scoring offense & 41st in scoring defense. VCU is also a talented team on both ends of the floor, however, the Rams can struggle offensively at times which we saw earlier this season in games against Rhode Island & St. Bonaventure. This should be a fun game to watch, however, I think Saint Louis is the better team in this one and as I expect the Billikens to bounce back behind a strong defensive effort, I think the play here is to take Saint Louis and the points. Good Luck! 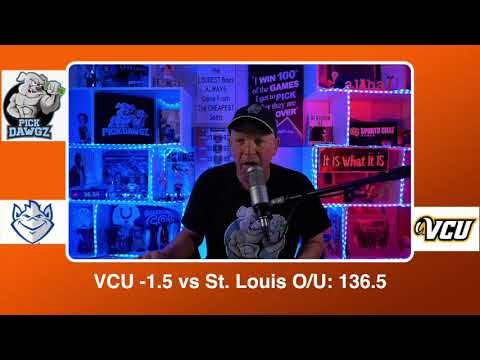