The Notre Dame Fighting Irish will travel to the KFC Yum! Center to take on the Louisville Cardinals this Tuesday night in College Basketball action.

The Notre Dame Fighting Irish had their 2-game winning streak snapped and dropped to 9-11 on the season after being defeated by the Syracuse Orange, 75-67, this past Saturday. Notre Dame led by a 46-32 margin at halftime, however, the Fighting Irish offense went cold in the 2nd half and Notre Dame could not fight back after Syracuse took a 64-60 lead with 6:53 left in regulation. Notre Dame shot 44.8% from the field and 38.7% from beyond the arc while Syracuse shot 43.5% from the field and 45.5% from beyond the arc. Notre Dame outrebounded Syracuse by a 36-31 margin and forced just 8 turnovers in the loss. Leading the way for the Fighting Irish was Trey Wertz who had 17 points, 3 rebounds, & 3 assists.

Defensively, Notre Dame is allowing their opponents to average 72.0 ppg on 43.6% shooting from the field. The Fighting Irish have a rebound margin of -2.5 and a turnover margin of -1.9.

Defensively, Louisville is holding their opponents to an average of 66.4 ppg on 41.7% shooting from the field. The Cardinals have a rebound margin of 5.0 and a turnover margin of -0.6.

Going into Louisville is always a tough challenge and it’s no different this season with the Cardinals posting a 8-1 record at home this season, however, it’s hard to trust Louisville right now as after missing action for about three weeks due to Covid-19 protocols, the Cardinals looked awful on both ends of the ball in their recent blowout loss at North Carolina. Notre Dame allowed one to slip away in the 2nd half against Syracuse, however, this is a team that has been playing solid basketball as of late, led by their offense that ranks 50th in FG% & 24th in 3P-FG%, and as the Fighting Irish have recently picked up wins at Pittsburgh & Duke, I think the play here is to take the Fighting Irish and the points. Good Luck! 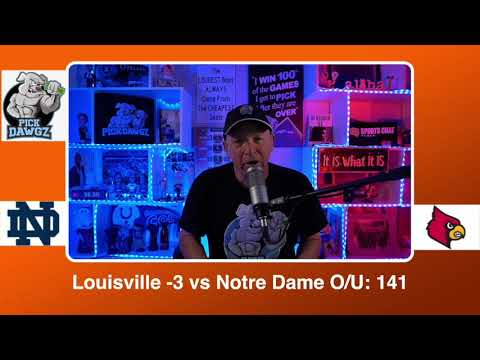