Kansas is coming off a 67-61 win over Texas Tech in its last game on February 22nd at home. Kansas was embarrassed by Tennessee and West Virginia on January 6th and February 6th, but ever since the loss to WVU, Kansas has been red hot. Kansas has won five straight games and is now ranked #17 in the nation. Kansas is 17-7 on the year and 11-5 in conference play. Kansas is also 12-11 against the spread this season. Kansas' leading scorer so far this season has been G Ochai Agbaji, who has scored 13.7 points per game for the Jayhawks. Kansas as a team has scored 73.7 points per game and has shot the ball at a 44.0% clip from the field. Kansas has also allowed 66.0 points per game to its opponents as well.

Texas is coming off an 84-82 loss to West Virginia in its last game on February 20th at home. Texas led by as many as 19 points in that one, as it was the most disappointing loss for the Longhorns in quite some time. Texas has now lost three of its last five games overall and is now ranked 14th in the nation. Texas is 13-6 and 7-5 in Big 12 play, putting the Longhorns in fifth place in the conference standings. Texas is also 7-12 against the spread this season. Texas' leading scorer so far this season has been G Andrew Jones, who has scored 15.6 points per game for the Longhorns. Texas as a team has scored 75.7 points per game and has shot the ball at a 45.2% clip from the field. Texas has also allowed 68.5 points per game to its opponents as well.

Texas opens as a 1.5-point favorite and the total is set at 139.5. I think this is going to be a bounce-back spot for Texas after its terrible loss to West Virginia. We know that both of these teams have serious talent, but I am going to side with the home team in this rivalry game. 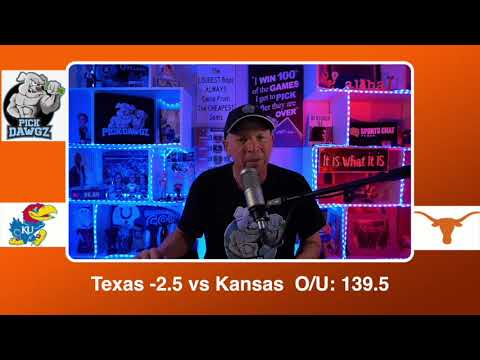