The 5th ranked Illinois Fighting Illini will travel to the Breslin Center to take on the Michigan State Spartans this Tuesday night in College Basketball action.

The 5th ranked Illinois Fighting Illini won their 7th straight game and improved to 16-5 on the season after defeating the Minnesota Golden Gophers, 94-63, this past Saturday. Illinois dominated Minnesota on the offensive end and had no trouble cruising to victory in the 2nd half after taking a 48-33 halftime lead. Illinois shot 56.1% from the field and 50.0% from beyond the arc while Minnesota shot 40.7% from the field and 50.0% from beyond the arc. Illinois outrebounded Minnesota by a 37-27 margin and won the turnover battle by a 18-10 margin in the victory. Leading the way for the Fighting Illini was Ayo Dosunmu who had a triple-double with 19 points, 10 rebounds, 10 assists, & 2 steals.

Defensively, Illinois is allowing their opponents to average 68.6 ppg on 40.7% shooting from the field. The Fighting Illini have a rebound margin of 9.8 and a turnover margin of -1.3.

The Michigan State Spartans snapped a 2-game losing streak and improved to 11-9 on the season after defeating the Indiana Hoosiers, 78-71, this past Saturday. Michigan State trailed by a 30-26 margin at halftime, however, the Spartans were outstanding offensively in the 2nd half and was able to pull away after taking a 70-58 lead with 4:52 left in regulation. Michigan State shot 49.2% from the field and 41.2% from beyond the arc while Indiana shot 43.9% from the field and 21.1% from beyond the arc. Michigan State outrebounded Indiana by a 36-29 margin and forced 11 turnovers in the victory. Leading the way for the Spartans was Aaron Henry who had 27 points, 5 rebounds, 2 assists, 1 block, & 1 steal.

Defensively, Michigan State is allowing their opponents to average 71.7 ppg on 42.7% shooting from the field. The Spartans have a rebound margin of 3.9 and a turnover margin of -2.9.

Illinois has been on an absolute tear as of late and is looking every bit the part of a contender for the NCAA Championship behind an offense that ranks 17th in scoring offense & 8th in FG%. Michigan State picked up a much-needed win against Indiana, however, this is just not a very good Spartans team this season as Michigan State comes into this game ranked just 193rd in scoring offense & 210th in scoring defense. Michigan State has not looked great against the top-tier teams of the Big Ten this season and as I just do not see how the Michigan State offense keeps up with Ayo Dosunmu and the Fighting Illini offense, I am taking Illinois to cover this large road spread. Good Luck! 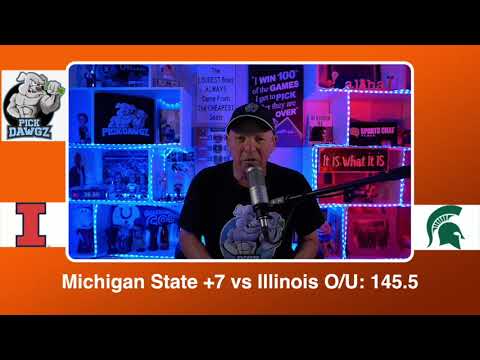