The Texas Longhorns will host the West Virginia Mountaineers in a Big 12 matchup this Saturday. This will be the rematch of their thriller back in January. Texas was able to pull off the comeback, thanks to a last second three by Andrew Jones. West Virginia will look to get redemption after getting beaten at home.

The Texas Longhorns come into this game having won their last two. In their most recent matchup against TCU, Texas took control early and never looked back.

The Longhorns shot 49.1% from the field, however were just 6-21 from deep. Andrew Jones again led the team with 19 points, his seventh consecutive game leading the team. He leads the team with 15.9 points per game. Three other players scored in double figures. The team did a good job moving the ball, having 15 of their 29 baskets come off assists. They also committed 4 less turnovers than TCU. For the season, Texas is averaging 75.3 points per game.

Texas only allowed 55 points on 36.5% shooting, 33% from beyond the arc. The Longhorns also controlled the glass, led by Jericho Sims with 8 rebounds. Overall, Texas is allowing an average of 67.6 points per game this season.

West Virginia is looking to bounce back after having lost to Oklahoma by only one point in overtime last Saturday. It was a close game the whole way, ending the first half and regulation dead even.

Derek Culver led the way for the Mountaineers with 29 points to go along with 14 boards. He is averaging a double double with 15.1 points and 10.4 rebounds on the season. Sean McNeil contributed 21 points, going 5-10 from three. Miles McBride contributed well with 19, and hit a pair of threes. As a team West Virginia shot 42.4% from the field, but only hit 11-21 free throws. On the season the Mountaineers are averaging 77.5 points per game.

West Virginia allowed 91 points, 72 of those in regulation. They allowed the Sooners to hit 44.9% of their shots, and all 5 of Oklahoma's starters finished in double figures. On the season West Virginia is allowing 71.9 points per game.

Texas is 1-4 against ranked opponents at home this year. West Virginia is 5-0 following a loss on the season.

This game should be as good as the last one, with both teams fighting for bracket positioning. Texas has not been playing their best basketball of late, going 2-3 in their last 5. Both wins were against unranked teams and they barely got by a subpar Kansas State team on the road. On the other hand, West Virginia is a team trending in the right direction. They are 5-2 in their last 7, with 3 of those wins against ranked opponents. Their two losses were by a combined 6 points. Look for the Mountaineers to continue their solid play and get revenge against the Longhorns, but give me the points to be safe. 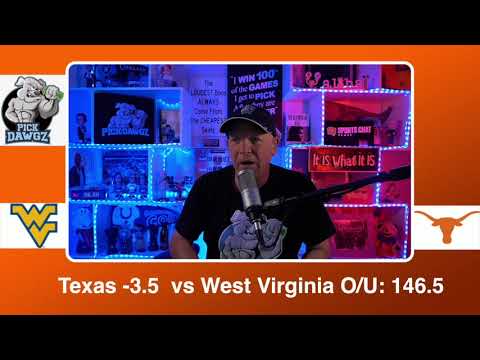