Utah is coming off a 74-56 loss to Oregon State in its last game on the road on February 18th. Utah was blown out by Oregon State and will have to play the Beavers again on February 22nd. Utah has now lost two straight games and is back to .500 on the year and 9-9. Utah is also 6-8 in PAC-12 play and is only 7-11 against the spread this season. Utah's leading scorer so far this season has been F Timmy Allen, who has scored 17.4 points per game for the Runnin' Utes. Utah as a team has scored 69.8 points per game and has shot the ball at a 45.5% clip from the field. Utah has also allowed 67.8 points per game to its opponents as well.

Oregon is coming off a 60-56 win over Colorado in its last game on February 18th at home. Oregon may no longer be ranked inside the Top-25, but the Ducks are on a four-game winning streak and could be ranked again with a win here. Oregon is 13-4 on the year and 8-3 in PAC-12 play as well, putting the team in third place in the conference standings. Oregon is also 9-8 against the spread this season. Oregon's leading scorer so far this season has been F Eugene Omoruyi, who has scored 17.5 points per game for the Ducks. Oregon as a team has scored 74.5 points per game and has shot the ball at a 46.1% clip from the field. Oregon has also allowed 66.4 points per game to its opponents as well.

Oregon opens as a 7.5-point favorite and the total is set at 140.5. Utah played Oregon very tight in the first meeting between these teams (until the very end), but that was at Utah. Here in Eugene, I do not see Utah competing. I like the Ducks to take care of business at home. 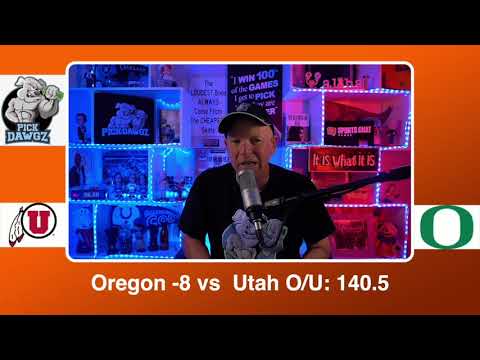