Purdue is coming off a 75-65 win over Michigan State in its last game on February 16th at home. Purdue has been hit or miss lately, as the Boilermakers have won three of its last five games overall. Purdue is 14-8 overall this season and 9-6 in Big Ten play, which puts the team in fifth place in the Big Ten conference standings. Purdue is also 10-10-2 against the spread this season. Purdue's leading scorer so far this season has been F Trevion Williams, who has scored 16.4 points per game for the Boilermakers. Purdue as a team has scored 70.6 points per game and has shot the ball at a 44.6% clip. Purdue has also allowed 66.6 points per game to its opponents as well.

Nebraska is coming off a 79-71 loss to Maryland in its last game on the road on February 17th. Nebraska was able to get its first Big Ten win of the year over Penn State on the road on February 14th but other than that this has been a disappointing season for the Cornhuskers. Nebraska is 5-14 overall and 1-11 in Big Ten play this year, putting the team in dead last in the standings. Nebraska is also 8-10 against the spread this season. Nebraska's leading scorer so far this season has been G Teddy Allen, who has scored 17.1 points per game for the Cornhuskers. Nebraska as a team has scored 69.5 points per game and has shot the ball at a 40.7% clip from the field. Nebraska has also allowed 72.6 points per game to its opponents as well.

Purdue opens as a 7.5-point favorite and the total is set at 136.5. These are the kind of games that Purdue cannot let slip by, I do not think the Boilermakers have any issues here. I will lay the points with Purdue on the road in what should be a double-digit win. 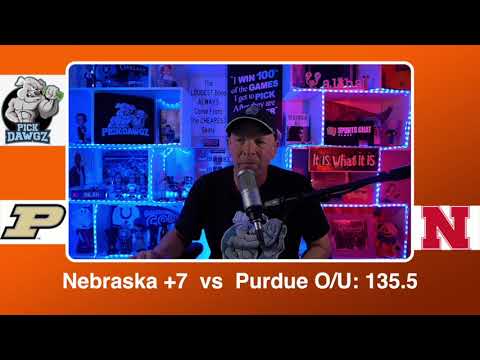