The Notre Dame Fighting Irish and Syracuse Orange face on Saturday in a college basketball showdown at the Carrier Dome.

The last four games played between these two teams saw the visiting team coming away with the victory.

On the other side of this matchup is the Syracuse Orange who sit with a 12-6 record overall and they have won two games in a row. In the last game against Boston College, the offense was strong scoring 75 points and that led to the victory. Syracuse on the season is averaging 76.6 points per game while their defense is giving up 70.4 points per game. Syracuse is shooting 44.2 percent from the field and 32.4 percent from behind the three point line. Over the last five games, Syracuse is averaging 69.4 points per game and the defense is going to need to be good in this one. Forward Alan Griffin has been the best player for Syracuse averaging 15.8 points while shooting 44.5 percent from the field and 37.3 percent from deep.

Syracuse is the better team, but I think Notre Dame will keep it close, and their offense is going to find a lot of success in this game. Notre Dame’s offense will be strong enough that they will come away with a cover of the spread. 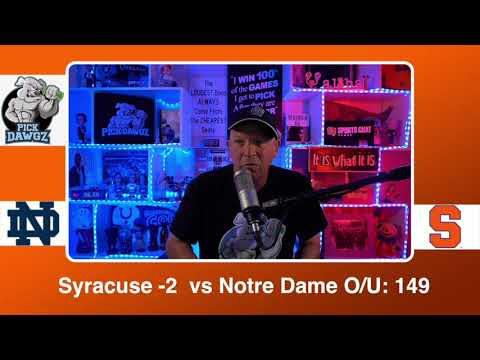