The Minnesota Golden Gophers and Illinois Fighting Illini face off on Saturday in a college basketball showdown at Williams Arena.

THe Minnesota Golden Gophers have been a different team at home compared to on the road, and this is a game that they need to win or their tournament chances could be slipping away from them. Overall Minnesota has a 13-9 record overall and they have lost two games in a row. One big issue for this team is their best defender Gabe Kalscheur suffered a hand injury and is out for this game. Minnesota on the season is averaging 74.8 points per game while their defense is giving up 72.6 points per game. Minnesota is led by Marcus Carr who averages 19.4 points and shoots 41.5 percent from the field and 32.8 percent from deep.

On the other side of this matchup is the Illinois Fighting Illini who sit with a 15-5 record overall and they have won six games in a row. Some of the last few games have been a little too close to comfort, but they were still able to come away with the victories. Illinois is a strong offensive team averaging 71.2 points per game while their defense is giving up 68.8 points per game.  Illinois is led by Ayo Dosunmu who averages 21.3 points and shoots 49.1 percent from the field and 42.2 percent from deep. In this game for Illinois it’s going to be about the defense stepping up and making Minnesota try to keep up.

It doesn’t matter if Minnesota is at home. Losing Kalscheur is big for them and they are going to struggle in this game. Back Illinois to cover this spread. 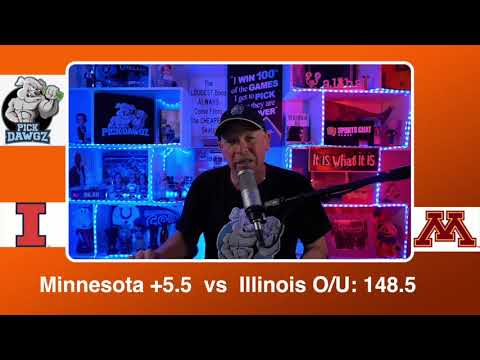