The Connecticut Huskies will be going on the road for a Big East battle with the Villanova Wildcats this Saturday.

Connecticut is coming off a win at home against Providence that featured the return of standout guard James Bouknight. He showed very little rust in that game, dropping 18 points off the bench while also contributing on the defensive end with 2 steals. Guards Tyrese Martin and RJ Cole were the other two in double digits, putting up 18 and 13 respectively. The team shot 46% from the field, and 41% from beyond the arc. The one area they will need to improve on from this game will be assists, with only 12 of their 29 buckets coming via the dime. On the season the Huskies are averaging 71.3 points per game.

UConn was great on the defensive end in this game. They limited Providence to 36% shooting from the field, and 33% from deep. They also won the rebound battle by 10 while forcing 5 turnovers. The Huskies are only allowing 65.1 points per game this year.

Villanova is coming off a disappointing loss against the Creighton Bluejays. The Wildcats lost 86-70, their largest deficit of the season. They were bad on both sides of the ball in this one.

On defense Villanova could not stop Creighton. The Bluejays shot 59% from the field and 46% from deep. They did not have an answer for Creighton's up-tempo attack and will look to set the pace against the Huskies. On the season Villanova has been giving up 68.8 points per game.

On offense it was an off night, as the Wildcats only shot 37% from the field and 31% from deep. They were led by Sophomore guard Justin Moore with 21 points, and the Senior Forward Jermaine Samuels with 16. On the season Villanova is averaging 78.6 points per game.

Connecticut is 5-1 ATS as the road team, and 2-0 ATS against ranked opponents. Villanova is 3-3 ATS at home, and 1-1 ATS following a loss.

This game will be a close game, as Villanova looks to improve their tournament seeding while Connecticut is playing for their tournament lives. Villanova has one of the most talented rosters in the nation, and will look to make that clear Saturday. However they will have their work cut out for them against a hungry Huskies team. UConn is trending in the right direction after the return of Bouknight. Before he went out their only loss on the season was in overtime against the then 9th ranked Bluejays. Ultimately Villanova should come away with a win in this one, but UConn will do enough to keep it close. Give me the Huskies and the points. 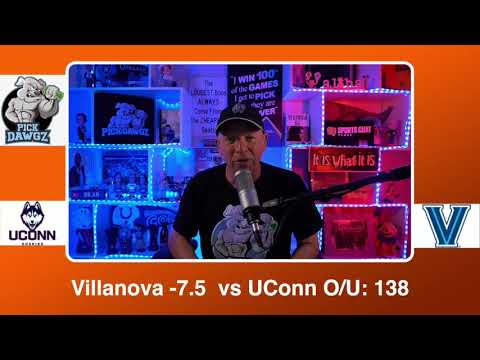