The USC Trojans and Arizona Wildcats face off on Saturday in a college basketball showdown at The Galen Center.

The USC Trojans come into this game with an 18-3 record overall and they have won seven games in a row. In the last game against Arizona State, the offense was elite putting up 89 points and led to the 18 point victory. USC on the season is averaging 76 points per game while their defense is giving up 63.6 points per game. USC is shooting 47.1 percent from the field and 34.6 percent from behind the three point line. In this game for USC it’s all going to be about running up the score, and making life tough on Arizona with keeping up.  USC is led by Evan Mobley who averages 16.8 points and shoots 60 percent from the field and 33.3 percent from deep.

The Arizona Wildcats come into this game with a 14-8 record overall and coming into this game they have lost four of their last five games. In their last game against UCLA, they were competitive in the first half, but in the second half they struggled and that led to a 70-64 defeat. Arizona on the season is averaging 75.8 points per game while their defense is giving up 68.4 points per game. Arizona is shooting 45 percent from the field and 37.5 percent from behind the three point line. Arizona is led by James Akinjo who averages 14.3 points and shoots 36.5 percent from the field and 39.2 percent from deep.

USC is the better team and even on the road they are going to have no issue getting the job done in this game,. Look for USC to run up the score, Arizona’s offense is going to struggle, and that will lead to USC coming away with a cover of the spread 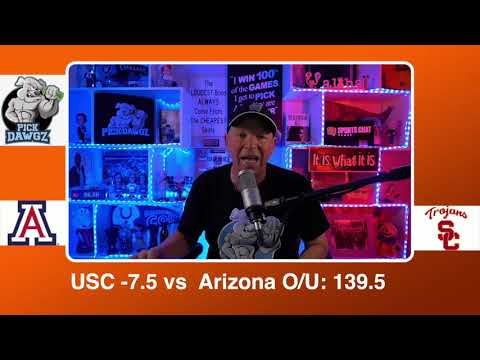