The Akron Zips will travel to Worthen Arena to take on the Ball State Cardinals this Friday night in College Basketball action.

The Akron Zips won their 3rd straight game and improved to 13-4 on the season after defeating the Northern Illinois Huskies, 81-76, this past Tuesday. Akron had more of a battle than they expected against Northern Illinois on their home court and trailed by a 45-41 margin at halftime, however, the Zips defense was much better in the 2nd half and Akron was able to pull away after taking a 64-56 lead with 9:44 left in regulation. Akron shot 38.5% from the field and 39.3% from beyond the arc while Northern Illinois shot 42.5% from the field and 40.9% from beyond the arc. Akron was outrebounded by Northern Illinois by a 42-37 margin and forced 12 turnovers in the victory. Leading the way for the Zips was Bryan Trimble Jr. who had 22 points, 3 rebounds, 1 assist, & 1 steal.

Defensively, Akron is allowing their opponents to average 69.4 ppg on 42.5% shooting from the field. The Zips have a rebound margin of 4.5 and a turnover margin of -0.1.

The Ball State Cardinals dropped to 7-10 on the season after being defeated by the Bowling Green Falcons, 75-62, this past Tuesday night. Ball State led by a 35-34 margin at halftime, however, the offense struggled to get anything going in the 2nd half and could not fight back after the Falcons took a 70-54 lead with 4:48 left in regulation. Ball State shot 46.4% from the field and 21.7% from beyond the arc while Bowling Green shot 39.2% from the field and 25.9% from beyond the arc. Ball State was outrebounded by Bowling Green by a 38-37 margin and lost the turnover battle by a 23-11 margin in the loss. Leading the way for the Cardinals was Jarron Coleman who had 11 points, 6 rebounds, 6 assists, & 1 steal.

Defensviely, Ball State is allowing their opponents to average 73.0 ppg on 42.3% shooting from the field. The Cardinals have a rebound margin of -2.2 and a turnover margin of -1.5.

Akron is one of the better MAC teams, led by arguably the best players in the conference in Loren Cristian Jackson and an offense that can really light it up from beyond the arc, however, this is still a team that is just 4-3 on the road and have recently struggled a bit defensively against two less than average MAC team sin Miami (OH) & Northern Illinois. Ball State does not jump out at you on the page when you look at their statistics, however, this is an experienced team that has a winning record at home, and as the Cardinals have shown they can play with the best with a recent 14-point win at home against Toledo, I think the play here is to take Ball State and the points. Good Luck! 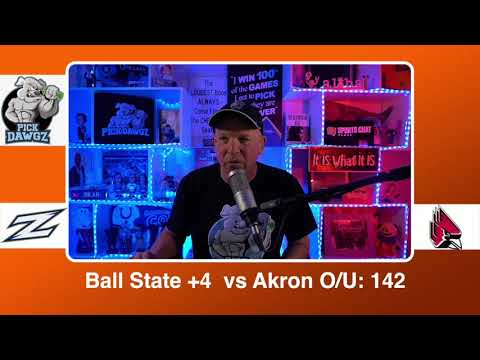