The NC State Wolfpack and Pittsburgh Panthers face off on Wednesday in a college basketball showdown at the Petersen Events Center.

The NC State Wolfpack come into this game with an 8-9 record overall but they have lost two games in a row. In the last game against Duke, the offense was a big issue scoring only 53 points and that led to the defeat. NC State on the season is averaging 73.5 points per game while their defense is giving up 70.6 points per game. NC State is shooting 46.7 percent from the field and 35.8 percent from behind the three point line. Jericole Hellems has been the best player for NC State averaging 13 points while shooting 48.1 percent from the field. Three different players are averaging at least 11 points per game and in this one it’s going to be important that the offense steps ups.

On the other side of this matchup is the Pittsburgh Panthers who sit with a 9-7 record overall and they have lost two games in a row. In the last game against Virginia Tech, they were five point underdogs, but lost by six. On the season, Pitt is averaging 72.1 points per game while their defense is giving up 69.5 points per game. Pitt is shooting 43.2 percent from the field and 32.8 percent from behind the three point line. Justin Champagnie has been the best player for Pitt so far this year averaging 18.7 points while shooting 52.6 percent from the field. Pitt currently has four different players who are averaging 10 points per game.

These are both teams who have been inconsistent but I think NC State is going to keep this game close. Look for NC State’s offense to find success, and that will be the difference. Back NC State to come away with a cover of the spread. 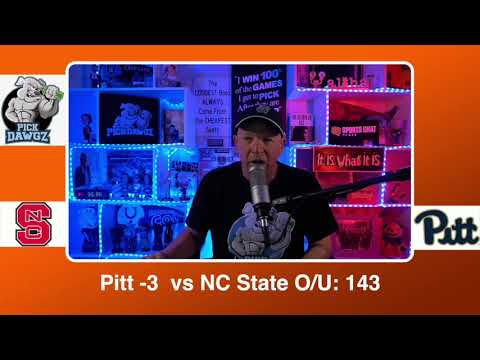