The Minnesota Golden Gophers and Indiana Hoosiers face off on Wednesday in a college basketball showdown at Bloomington Assembly Hall.

The Minnesota Golden Gophers come into this game with a 13-8 record overall and to make the tournament they are going to need to win some of these games. At home, Minnesota has found all kinds of success, but on the road there have been Away from home this season, Minnesota has an 0-7 record and they have also had issues covering spreads away from home. In the last game against Maryland, the offense only managed 59 points and that led to the loss. Minnesota away from home is averaging 63.6 points per game while their defense is giving up 80 points per game. Guard Marcus Carr has been the star for Minnesota averaging 19.4 points while shooting 41.4 percent from the field and 32.8 percent from behind the three point line.

On the other side of this matchup is the Indiana Hoosiers who sit with an 11-9 record overall and coming into this game they have won two of their last three games. In the last game against Ohio State, their offense really struggled scoring only 59 points and that led to the loss. Indiana on the season is averaging 72.2 points per game while their defense is giving up 69.2 points per game. Indiana is shooting 44.3 percent from the field and 34.5 percent from behind the three point line. Trayce Jackson Davis has been the best player for Indiana averaging 19.5 points while shooting 53 percent rom behind the three point line.

Minnesota is awful on the road and there is no reason to believe it’s going to be any different in this game. Minnesota’s offense is going to struggle and that will lead to Indiana coming away with a win and a cover of the spread. 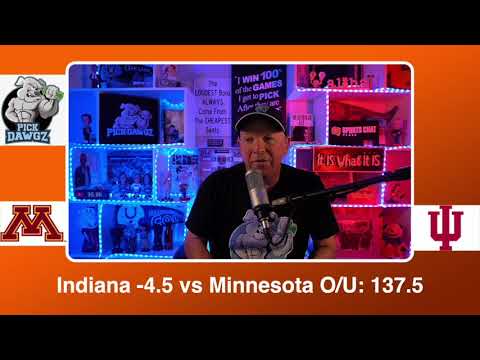