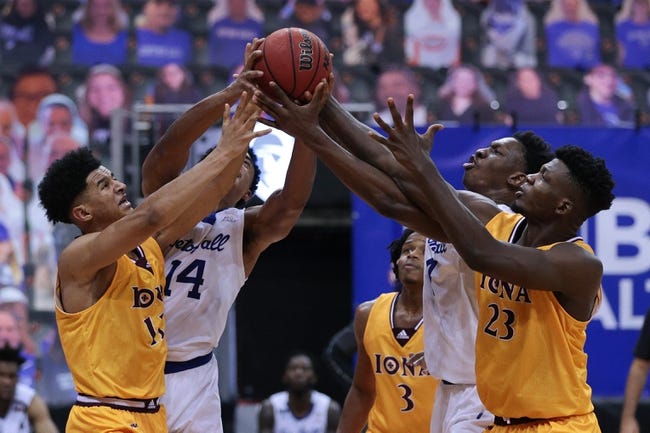 The Iona Gaels will travel to the People’s United Center to take on the Quinnipiac Bobcats this Wednesday night in College Basketball action.

The Iona Gaels dropped to 6-4 on the season after being defeated by the Manhattan Jaspers, 77-70, this past Saturday. Iona was able to take the first game of the two-game series against Manhattan the night before, however, the Gaels defense struggled in this one and allowed Manhattan to pull away later after the Jaspers closed out the final 3:34 of regulation on a 5-0 run. Iona shot 44.0% from the field and 26.3% from beyond the arc while Manhattan shot 44.2% from the field and 44.4% from beyond the arc. Iona was outrebounded by Manhattan by a 31-29 margin and lost the turnover battle by a 15-14 margin in the loss. Leading the way for the Gaels was Isaiah Ross who had 19 points, 5 rebounds, 1 assist, & 3 steals.

Defensively, Iona is allowing their opponents to average 68.1 ppg on 42.5% shooting from the field. The Gaels have a rebound margin of 3.0 and a turnover margin of -0.7.

Defensively, Quinnipiac is allowing their opponents to average 69.8 ppg on 38.3% shooting from the field. The Bobcats have a rebound margin of -3.7 and a turnover margin of -3.7.

Iona had a long layoff as their two-game series against Manhattan was their first live action since late December and despite losing their last game, I was impressed with how the Gaels looked, especially on the offensive end. Quinnipiac has lost 7 of their last 9 games and have really struggled on the offensive end this season as they come into this game ranked just 268th in scoring offense & 297th in FG%. Quinnipiac needs to rely on their defense to stand any chance, however, as the Bobcats had no answers for Canisius on the defense end, I think the Iona offense can do more than enough in this one to cover this road spread. Good Luck!