Rice is coming off a 61-58 loss to Old Dominion in its last game on January 16th at home. Rice was able to take game one of that back-to-back in the season series against Old Dominion. The final score in that game was 69-59 in favor of the Owls. Rice has won two of its last three and three of its last five overall. Rice is 10-4 on the year and 4-2 in conference play so far this season. Rice's leading scorer so far this season has been G Quincy Olivari, who has scored 15.7 points per game for the Owls. Rice as a team has scored 79.3 points per game and has shot the ball at a 45.5% clip from the field. Rice has also allowed 71.0 points per game to its opponents as well.

UAB is coming off a 70-55 loss to Charlotte in its last game on the road on January 16th. UAB was able to dominate Charlotte in game one of the season series, as the Blazers started the game on a 23-1 run. UAB was not as lucky on the 16th, as Charlotte was able to earn the revenge win on its home court. UAB's loss to Charlotte snapped a three-game winning streak for the Blazers. UAB is currently 10-2 on the year and 3-1 in conference play so far this season. UAB's leading scorer so far this season has been G Michael Ertel, who has scored 13.2 points per game for the Blazers. UAB as a team has scored 74.3 points per game and has shot the ball at a 46.2% clip from the field. UAB has also allowed 56.4 points per game to its opponents as well.

UAB opens as a 10-point favorite and the total is set at 140.5 I like UAB to win this game, but I believe 10 points are too much. Rice's offense makes it tough for any team to beat the Owls by more than 10, and I think we could see the same issue here. 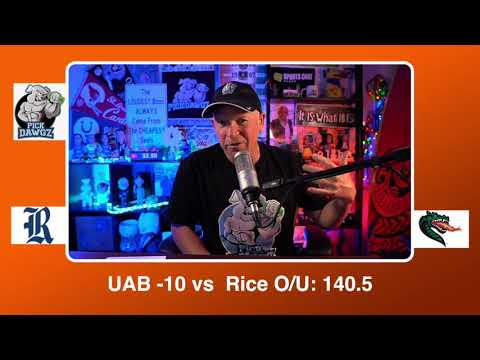