The 16th ranked Louisville Cardinals will travel to Lawrence Joel Coliseum to take on the Wake Forest Demon Deacons this Wednesday night in College Basketball action.

The 16th ranked Louisville Cardinals won their 4th straight game and improved to 8-1 on the season after defeating the 19th ranked Virginia Tech Hokies, 73-71, this past Wednesday. Louisville used a 7-0 run to start the 2nd half to take a 43-31 lead with 17:32 left in regulation and was able to hold off a late Virginia Tech charge for the victory. Louisville shot 47.3% from the field and 37.5% from beyond the arc while Virginia Tech shot 42.6% from the field and 30.0% from beyond the arc. Louisville outrebounded Virginia Tech by a 37-30 margin and forced 10 turnovers in the victory. Leading the way for the Cardinals was Jae’Lyn Withers who had a double-double with 16 points, 12 rebounds, 1 block, & 2 steals.

Defensively, Louisville is holding their opponents to an average of 62.8 ppg on 39.1% shooting from the field. The Cardinals have a rebound margin of 7.2 and a turnover margin of -1.4.

The Wake Forest Demon Deacons lost their 3rd straight game and dropped to 3-3 on the season after being defeated by the 21st ranked Duke Blue Devils, 79-68, this past Saturday. Wake Forest was able to tie the game at 52-all with just 12:23 left in regulation on a Jalen Johnson three-pointer, however, the Demon Deacons struggled defensively the rest of the way and could not fight back after Duke took a 68-59 lead with just 5:46 left in the game. Wake Forest shot 45.8% from the field and 30.0% from beyond the arc while allowing Duke to shoot 50.8% from the field and 33.3% from beyond the arc. Wake Forest was outrebounded by Duke by a 15-14 margin and committed 15 turnovers in the loss. Leading the way for the Demon Deacons was Daivien Williamson who had 17 points, 2 rebounds, 2 assists, & 2 steals.

Defensively, Wake Forest is holding their opponents to an average of 65.3 ppg on 44.5% shooting from the field. The Demon Deacons have a rebound margin of 0.8 and a turnover margin of 1.5.

Louisville is a talented team that is led by an outstanding defense, however, the Cardinals just haven’t looked as dominant on the road and can struggled at times offensively as they rank just 216th in scoring offense. Wake Forest has been dealing with injuries, however, despite losing their last three games (all on the road), I’ve been impressed by the performances that they had against Virginia & Duke as both games were competitive. Louisville is no doubt the better team, however, Wake Forest has shot the ball well this season, ranking 49th in FG%, and as I think they can keep this one close on their home court, I think the play is to take Wake Forest and the points. Good Luck! 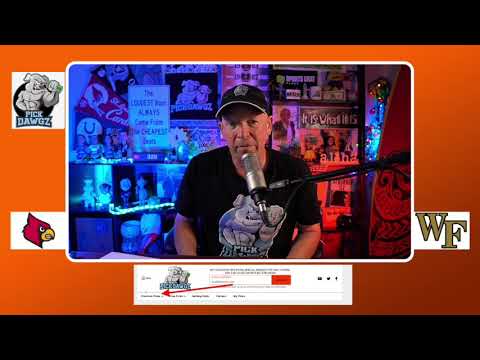