Arkansas is coming off a 99-69 win over Georgia in its last game at home on January 9th. Arkansas totally dominated one of the weaker teams in the SEC at home in that game, as the Bulldogs did not stand a chance. Arkansas has now won three of its last five games overall but did end a two-game losing streak inside conference play. Arkansas is 10-2 overall this season and 2-2 in SEC play so far. Arkansas' leading scorer so far this season has been G Moses Moody, who has scored 16.7 points per game for the Razorbacks. Arkansas as a team has scored 88.2 points per game and has shot the ball at a 46.2% clip from the field. Arkansas has also allowed 67.3 points per game to its opponents as well this season.

LSU is coming off a 75-61 win over Ole Miss in its last game on January 9th on the road. LSU was able to earn its most impressive conference win of the season thus far, as the road win over a formidable team like Ole Miss helps LSU in many ways. LSU is now8-2 overall this season and 3-1 in conference play out of the SEC. LSU's only loss in conference play this season as a road loss by four points to Florida, not a shameful loss at all for the Tigers. LSU's leading scorer so far this season has been G Cameron Thomas, who has scored 22.3 points per game for the Tigers. LSU as a team has scored 85.6 points per game and has shot the ball at a 49.1% clip from the field. LSU has also allowed 70.0 points per game to its opponents as well.

LSU opens as a 3-point favorite and the total is set at 158.5. I am going to take LSU at home here, as I think LSU is the hotter team and has the flashier offense. LSU can torch teams beyond the arc, and I think the Tigers do just that in this one. I will lay the points with the home team, but this should be a close game for quite a while. 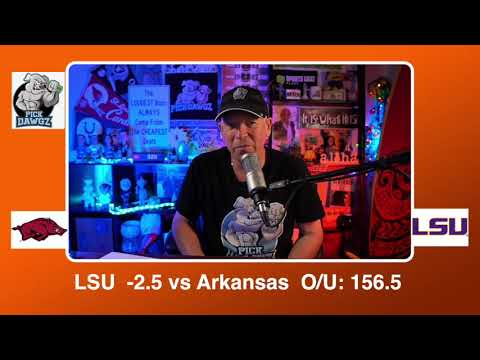