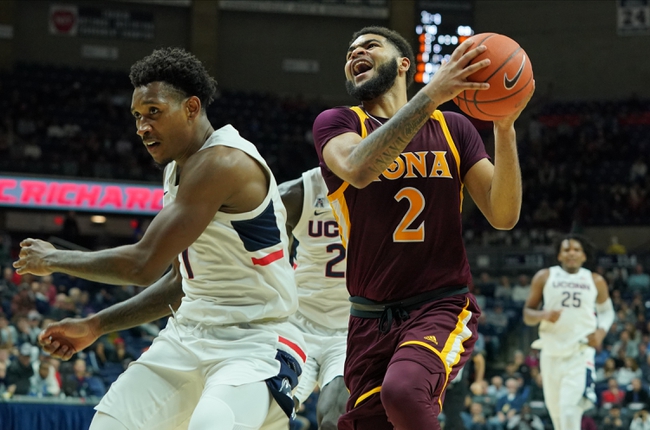 The Iona Gaels and Saint Peter’s Peacocks will square off at Boardwalk Hall this Wednesday night in the Quarterfinals of the Hercules Tires MAAC Championship.

The 7-seed Iona Gaels keep their season alive and improved to 12-16 on the season after defeating the Canisius Golden Griffiths, 70-60, in the 1st round of the of the MAAC Championship last night. Iona was outstanding on the defensive end agianst the Canisius and was able to pull away late in the 2nd half after taking a 63-54 lead with 1:52 left in regulation. Iona shot 44.4% from the field while holding the Golden Griffiths to just 35.5% shooting from the field and 26.3% shooting from beyond the arc. Leading the way for the Gaels was E.J. Crawford who had 22 points, 5 rebounds, 1 assist, 1 block, and a steal.

Defensively, Iona is allowing their opponents to average 71.8 ppg on 43.2% shooting from the field. The Gaels have a rebound margin of -1.7 and a turnover margin of -1.1.

The Saint Peter’s Peacocks finished their regular season with an overall record of 17-12 and earned the 2-seed in the MAAC Championship after finishing conference play with a 14-6 record. Saint Peter’s can have a hard time scoring the basketball, however, the Peacocks were able to have success behind and outstanding defense that was one of the best in the MAAC this season. Saint Peter’s struggled early in the season, which including losses to Bryant and Wagner, however, the Peacocks were outstanding in conference play, and come into the MACC Championship winning 11 of their last 13 games.

Defensively, Saint Peter’s is holding their opponents to an average of 64.4 ppg on 40.4% shooting from the field. The Peacocks have a rebound margin of 5.1 and a turnover margin of -1.2.

Trends will be updated when released.

Iona comes into this game ranked 196th in scoring offense, 92nd in three-pointers made per game, and 244th in scoring defense.

Saint Peter’s comes into this match-up ranked 295th in scoring offense, 41st in scoring defense, and 51st in defensive FG%.

Saint Peter’s has had a successful season in the MAAC led by their outstanding defense, however, I have a hard time trusting a team in which their leading scorer is averaging just 8.5 ppg. Iona is not the same level of team that we’ve seen in past years, however, this is still a team that has plenty off post-season experience and as Iona was competitive in both losses against Saint Peter’s during the regular season (combined losses by just 4 points), my initially leaning on taking the Gaels and what I expect will be a few points. Please check back when the line is released.