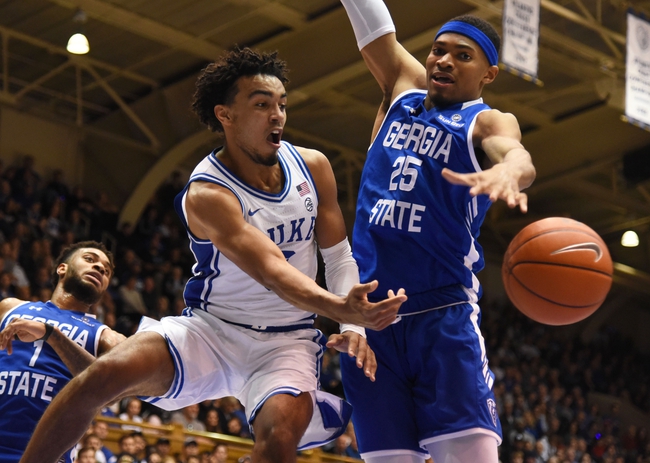 The Georgia Southern Eagles clash with the Georgia State Panthers in the Sun Belt Quarterfinals.  The Eagles are (19-13), coming off a 82-81 win over Louisiana. The Panthers are (19-12), after beating Little Rock, 89-70.

The Eagles have been led this season by Ike Smith.  Smith is totaling 14.1 points, 5.5 rebounds, and 2.1 assists per contest.  Jackson is collecting 13.5 points, 4.5 rebounds, and 1.5 assists per game. Georgia Southern is averaging 75.4 points per game, while converting on 44.1 percent from the floor on the season.

Williams has guided the Panthers this year, with a pretty balanced game.  Williams is finishing with an average of 14.6 points, 4.5 rebounds, and 4.4 assists per game.  Corey Allen is contributing 13.7 points and 3 rebounds per contest. Georgia State is registering 78.6 points, while converting on 37 percent from distance.

Georgia Southern is 2-4 ATS in their last 6 games.

Georgia Southern is 6-3 SU in their last 9 games.

The under is 5-2 in Georgia Southern last 7 games.

Georgia State is 5-1 ATS in their last 6 games in March.

Both teams are averaging over 75 points on offense, which ranks in the top 65.  The Panthers are solid from being the 3-point arch, ranking 30th in the country.  An area of note, Georgia Southern commits a ton of fouls on defense, ranking 284th in fouls committed on defense.  This game could come down to foul shooting, as the average margin of victory is separated by 1 point in this series last 10 games.  The Panthers have the edge in the category, connecting on over 74 percent, while the Eagles are converting on less than 68 percent from the charity stripe.  Final score prediction, Georgia State will win and Georgia Southern will cover against the spread, 78-74.