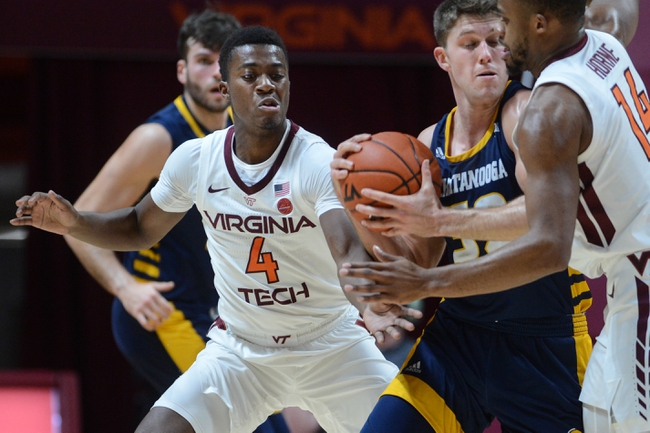 Where to Watch: NextStar; ESPN+ Stream College Basketball all season on ESPN+. Sign up now!

The Wofford Terriers and Chattanooga Mocs will square off at the Harrah’s Cherokee Center in the Semifinals of the SOCON Men’s Championship this Sunday night.

The 7-seed Wofford Terriers kept their NCAA dreams alive after upsetting the 2-seed Furman Paladins, 77-68, last night. Wofford was outstanding offensively and on the boards agianst Furman and was able to pull away late after a 6-0 run gave the Terriers a 74-62 lead with just :28 seconds left in regulation. Wofford shot 48.0% from the field, 40.9% from beyond the arc, and outrebounded Furman by a 40-24 margin in the victory. Leading the way for the Terriers was Chevez Goodwin who had 19 points, 9 rebounds, and an assist.

Defensively, Wofford is allowing their opponents to average 68.4 ppg on 43.7% shooting from the field. The Terriers have a rebound margin of 0.5 and a turnover margin of 0.2.

The 6-seed Chattanooga Mocs also pulled off an upset in the quarterfinals after defeating the 3-seed UNC-Greensboro Spartans, 78-68, last night. Chattanooga trailed by a 42-35 at halftime, however, dominated the Spartans on both ends of the court in the 2nd half and was able to hold off the Spartans after taking a 69-59 lead with 5:03 left in regulation. Chattanooga shot 53.7% from the field and outrebounded UNC-Greensboro by a 40-31 margin in the victory. Leading the way for the Mocs was Ramon Vila who had a double-double with 22 points and 12 rebounds.

Defensively, Chattanooga is allowing their opponents to average 68.4 ppg on 44.5% shooting from the field. The Mocs have a rebound margin of 2.4 and a turnover margin of -0.2.

Wofford comes into this game ranked 132nd in scoring offense, 56th in FG%, and 151st in scoring defense.

Chattanooga comes into this match-up ranked 115th in scoring offense, 89th in FG%, and 152nd in scoring defense.

Chattanooga has been often forgotten this season when it comes to the Southern Conference as many people generally talk about ETSU, Furman, UNCG, and Wofford, however, the Mocs are a dangerous team that are solid on both ends of the court. Wofford picked up a nice victory against Furman, however, the Terriers are the same team we’ve seen in recent years, and came into the SOCON Tournament riding a 7-game losing streak. Chattanooga took care of business in both match-ups against Wofford this season with their average victory coming at 10 ppg, and as I think their offense will be able to put up some points against the below average Wofford defense, I’m initially leaning towards taking Chattanooga who should at worse be favored by a few points once the line is released.

Brett’s Pick Please Check Back When The Line Is Released