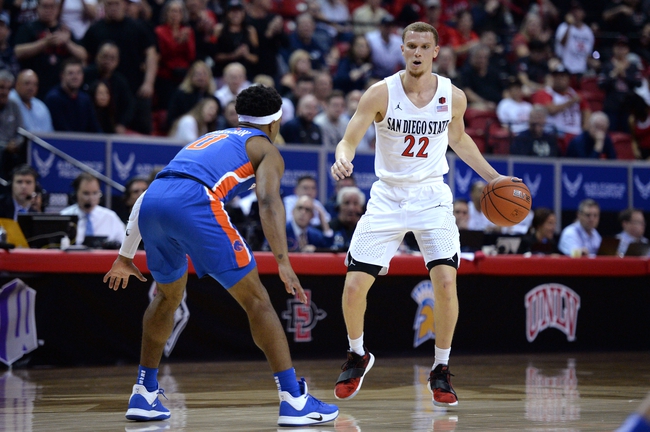 The Utah State Aggies (25-8, 12-6 CONF) and the San Diego State Aztecs (30-1, 17-1 CONF) will meet on Saturday, March 7th for the Mountain West Conference Championship game at the Thomas & Mack Center in Las Vegas, NV. The game will be played at 5:30 PM eastern time.

Utah State defeated Cinderella #11 seed Wyoming in the Semifinals, 89-82. Wyoming made it a close game for a while, but Utah State's sharpshooting and timely defense/rebounding allowed them to extend their lead late and take control by the later stages of the game. San Diego State took down Boise State in their Semifinal game, 81-68. The game was tied at 40-40 at the half, as Boise State gave SDSU a good run for a while. Both of these teams are "in" when it comes to the Bracketology for the NCAA Tournament. San Diego State is a lock, but Utah State is right on the bubble in the "last four in, first four out" conversation. A win for either of these teams secures a spot in the NCAA Tournament as a conference champion.

*** Stats for both teams are from games played before March 6th.

The line has not been released yet for this game, therefore I will give my final score prediction and update this article tomorrow morning. I like the way San Diego State has been able to handle adversity in this tournament so far. Boise State and Air Force were able to get off to nice leads early, but San Diego State managed to stay calm and won both games handily. I think San Diego State will be the Mountain West Champions in 2020, and they will defeat Utah State 79-72.

UPDATE: Now that the line is out, I notice that the total is rather low. This is a championship game, so defense will remain a focus for both teams throughout the game; however, I think these offenses are strong enough to each put up at least more than 65 points, so I will take the over 130 in this one.