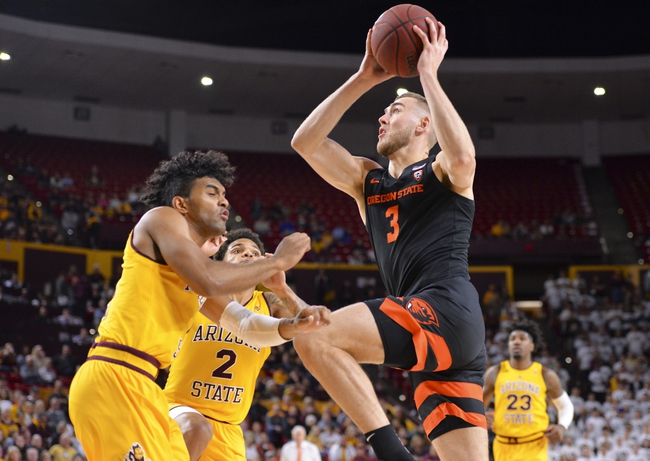 The California Golden Bears will travel to Gill Coliseum to take on the Oregon State Beavers this Saturday afternoon in College Basketball action.

The California Golden Bears had their 2-game winning streak snapped and dropped to 13-17 (7-10 Pac-12) on the season after being defeated by the 13th ranked Oregon Ducks, 90-56, this past Thursday night. California has no answers defensively against Oregon and couldn’t fight back after going into halftime trailing by a 46-20 margin. California shot just 35.7% from the field while allowing Oregon to shoot 59.6% from the field and 70.6% from beyond the arc. Leading the way for the Golden Bears was Matt Bradley who had 15 points, 4 rebounds, 2 assists, 1 block, and a steal.

Defensively, California is allowing their opponents to average 69.5 ppg on 43.3% shooting from the field. The Golden Bears have a rebound margin of -0.8 and a turnover margin of -1.0.

The Oregon State Beavers snapped their 4-game losing streak and improved to 16-13 (6-11 Pac-12) on the season after defeating the Stanford Cardinal, 68-65, this past Thursday. Oregon State led by a 59-51 margin with 7:06 left in regulation and was able to hand on late for the victory after a game-tying three-point attempt by Stanford’s Isaac White came up short as time expired. Oregon State shot 43.8% from the field and 40.0% from beyond the arc in the victory. Leading the way for the Beavers was Tres Tinkle who had 23 points, 4 rebounds, 2 assists, and a steal.

Defensively, Oregon State is allowing their opponents to average 68.0 ppg on 43.1% shooting from the field. The Beavers have a rebound margin of -0.4 and a turnover margin of 0.4.

California comes into this game ranked T-329th in scoring offense, 260th in FG%, and T-180th in scoring defense.

Oregon State comes into this match-up ranked 177th in scoring offense, 69th in FG%, and 139th in scoring defense.

California has exceeded expectations this season which included a recent upset win at home against Colorado, however, the Golden Bears have really struggled on the road this season, posting just a 1-9 overall record while losing their last 5 road games by an average of 19.6 ppg. Oregon State has been impressive both straight up & agianst the spread at home this season and as I expect a strong performance on senior day by Tres Tinkle and the Beavers, I’m taking Oregon State to cover this large home spread. Good Luck!