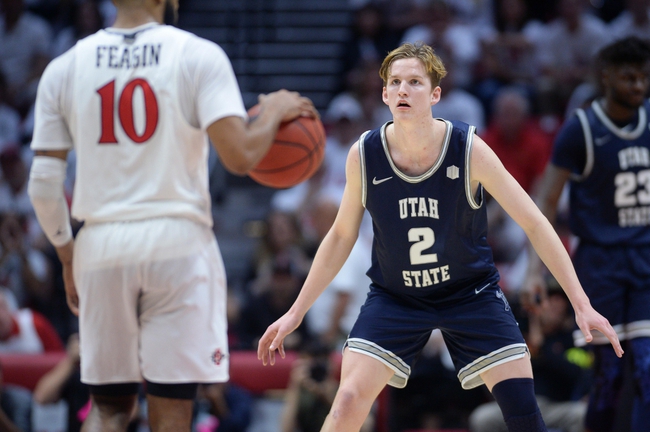 The Utah State Aggies (23-7, CONF 12-5) and New Mexico Lobos (17-13, CONF 6-11) face off in a Mountain West showdown at The Pit. Utah State has won the last three games against New Mexico, but this is the first meeting between the two teams this year.

Utah State had some struggles during the middle of the season but they have turned it back around and won six games in a row. The Aggies are known for a strong offensive team and over the last five games they have been even stronger averaging 77.6 points per game.

In Utah State’s last game they played one of their best games of the season putting up 94 points against San Jose State.

Center Neemias Queta was the star for the Aggies in that game putting up 23 points and 10 rebounds in 22 minutes.

On the road this season Utah State is averaging 69.1 points but if they want to win this game it’s probably going to take more than that to come away with a win.

New Mexico has been good for most of the season but coming into this game they are struggling having lost five games in a row.

At home this season the Lobos are 14-3 and the biggest reason for their success has been the offense that is averaging 82.6 points per game.

In their last home game the offense was strong putting up 74 points but the defense let them down giving up 88 points per game.

Guard JaQuan Lyle is the star of New Mexico averaging 15.3 points and in the last game against Air Force he put up 18 points. Over the last five games New Mexico is averaging 65 points per game while giving up 76.4 points.

Utah State is the better team, but laying this type of number on the road is a scary thought. New Mexico’s offense is going to run up the score and that will be enough to keep them close in this game.